This was our final full day in fair Paris. We more or less went all over the city in no particular order... which proves that the Paris metro is amazing and so easily accessible and takes you anywhere!

We woke up and took said metro up to Montmartre. Strolling the streets of classic Montmartre was one of my very favorite things we did the entire trip. It has old world charm and felt entirely different than anywhere else in Paris as we climbed the hilly streets. It was also quieter, but this may have been because we were up before most of the city was yet awake. This was also where I had a major pregnancy low that I alluded to earlier in my previous blog post. We were literally en route to what has been dubbed the absolute best bakery in Paris, but my belly cried out for an egg McMuffin as we walked past a McDonalds. Mind you, I haven't set foot in a Micky D's in ages. I mean like probably 15 years. But all of a sudden an egg McMuffin was THE THING I NEEDED OR I WOULD DIE. So there you go. I traded the world's best croissant for an egg McMuffin. It was a major life low.

However, we soldiered on to that best bakery in Paris (and if it's the best in Paris, let's be real -- it's probably the best IN THE WORLD,) and Michael ate the most delectable, flaky-yet-held-together, buttery, perfectly made croissant that I have ever ever ever had one bite of. (I was full from my trash breakfast but had to at least have a taste.) I swear the heavens opened up and light beams fell on my face in that one bite. If you do ANYTHING right in Paris, it is to go to this bakery: Le Grenier a Pain (38 Rue des Abbesses, 75018.) Order everything! It's phenomenal. I was so crushed to have missed the best croissant in the world, so we actually went back for lunch after visiting Sacre Coeur and shared a baguette sandwich, a slice of quiche, and a tomato/mozzarella roll. The crust of the quiche.....Ohhhh my stars. By lightyears, it's the best crust anywhere. Anywhere in the whole world. Just go! Go here and sit on the street and blissfully savor every bite of your breakfast, lunch, snack or whatever it is that you are eating. Sitting on the street (because there is no where else to sit) and watching Montmartre life go by before us as we ate our lunch -- this was by far my favorite meal in Paris. And probably the cheapest!

Ok, let me come back down to earth now. After stopping at the best bakery in the world for Michael to have his croissant, we then climbed the hills and long stairways up to Sacre Coeur. Michael and I both so loved sitting on the steps and looking out over all of Paris. It's romantic and scenic and beautiful. The church is amazing as well: at least one person has been praying for peace inside Sacre Coeur since 1885. Pretty spectacular. 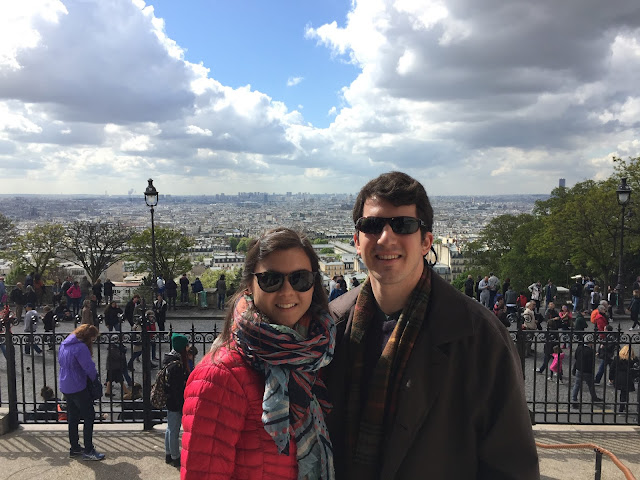 We then walked over to Place du Tertre, the iconic artist-lined square where you can get your caricature painted. There are more serious artists there as well, and I loved one artist's water colored Loire Valley and Normandy beaches scenes. I wish we had saved our money to buy one or two of these, but at that point, we had already purchased a couple paintings and other souvenirs.


We then had the amazing lunch that I described above, and took the metro back into central Paris. We crossed the Pont Alexander III bridge with its iconic belle epoque style street lamps, and walked up Champs-Elysees to the Arc de Triumph. The whole avenue was a throng of tourists and consumerism... not our favorite spot, but still worth being there! I had meant to stroll down Avenue Montaigne and peek into the some of the flagship fashion house stores, but we didn't love being among such crowds so we instead took the metro .... to a neuroscience library!

That is not a joke.

Michael (who is a neurosurgeon) had known that one of the founding fathers of neuroscience was a Frenchman named Jean-Martin Charcot whose sketches and books are still kept today in a little library at one of the Paris hospitals. So off we went to the 13th arrondissement where we encountered astonishingly few people who spoke English as we mapped our way through a web of medical buildings, only to find that the library was in a building undergoing renovations! They had moved all the books to another part of the labyrinth, so we walked around again until we found what we were looking for.... only to be told that we could only look at the books and not open them. It was a rather unsuccessful adventure, but at least we've been in a Parisian hospital and library! And I saw a man through the open door of the men's restroom literally drinking water from the faucet because, THERE ARE NO WATER FOUNTAINS ANYWHERE IN THE CITY OF PARIS. Not even in the hospitals! Strange things.

We took the metro back to our neighborhood in Saint Germain and strolled along the river near Notre Dame, then rested in our little flat before dinner.


For dinner, we decided last minute to go all the way back to the 17th arrondissement and eat at Le Relais de Venise (271 Boulevard Pereire, 75017.) This is a steak frites place that is FABULOUS. Doors open at 7pm but we were told to get there early because a line forms out the door, and it's first come, first serve. All the waitress asks you is how you want your steak cooked. And then out comes bread and the best little French salad of butter lettuce and walnuts in a dijon dressing, followed by mountains of piping hot French fries and seriously amazing steak. Annnnnnnd you get seconds and I think thirds of the steak and fries... basically it's all you can eat, but you really can't eat that much of it because it is SO RICH and so filling. Unreal. Everyone is completely squashed into the place and you are definitely sharing elbow space with the stranger next to you, but it is total Paris charm and totally delicious in every way. Michael and I were too full for dessert until we saw a man behind us eating this half-foot tall tower of meringue, chocolate sauce, and ice cream.... and of course we ordered one of those. It did NOT disappoint. Definitely, definitely this place is not a place you want to miss if you are in Paris!

From dinner, we walked all the way down Avenue Raymond Poincaré toward Trocadero. This is a beautiful street (as are all streets in the 8th,) and I especially loved Place Victor Hugo. The sun was setting, it was freezing cold, and yet all the sidewalks were still full of people sitting outside at cafes ordering drinks and greeting each other with loud bon jours. So classic. So Paris. Once we got to Trocadero, I pretty much couldn't feel my feet, but was it wonderfully surprising to come across a beautiful view of the Eiffel Tower and Champs de Mars behind it. Our first and last nights in Paris were spent with the Eiffel Tower sparkling nearby.... wouldn't have wanted it any other way! 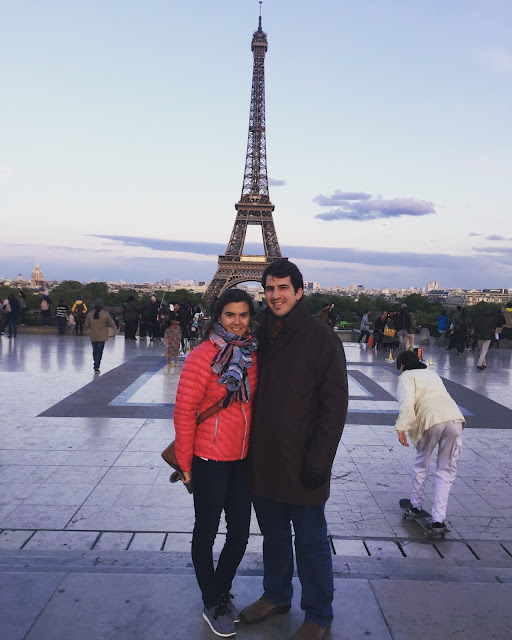