On Wednesday, our second full day in Paris, we walked to Saint Chapelle and saw the GLORIOUS stained glass windows in the chapel. This is NOT to be missed. It was one of my absolute favorite things that we did in Paris. If you can, you want to see the windows on a sunny day in order to best see the colors and scenes in the windows. It is stunning! The fifteen stained glass windows depict the Biblical story from creation to the passion of Christ to John's revelation, and the last window basically shows how King Louis IX is the rightful king, descending from Christ. (Or something like that.... it's been a while.) 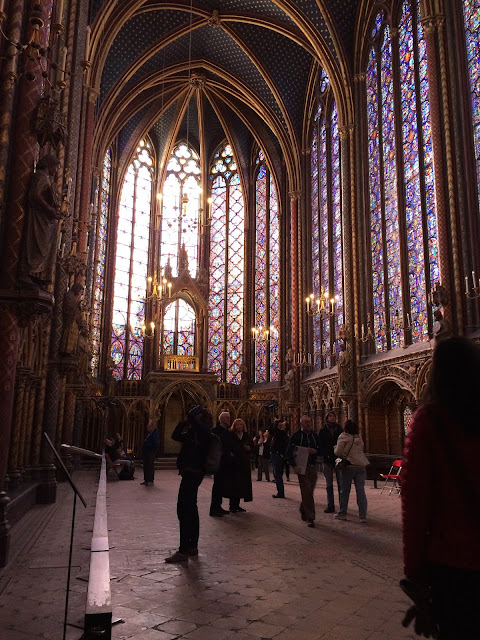 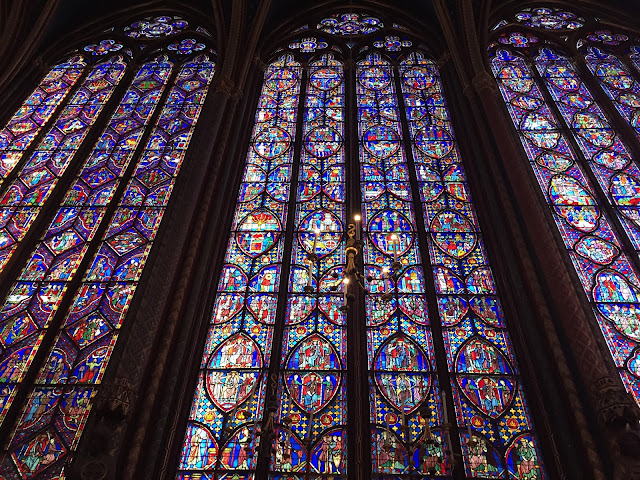 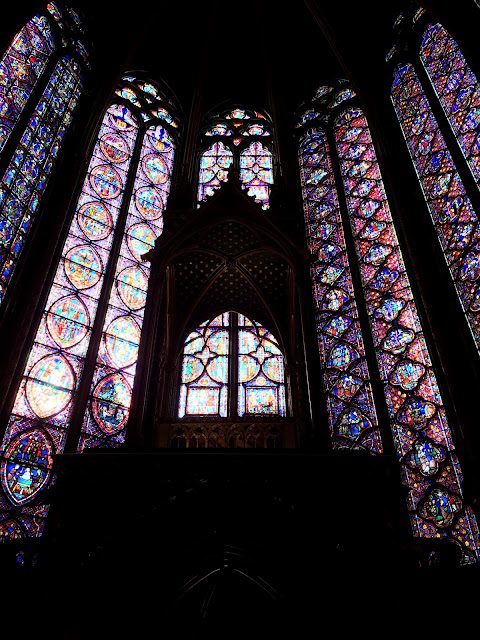 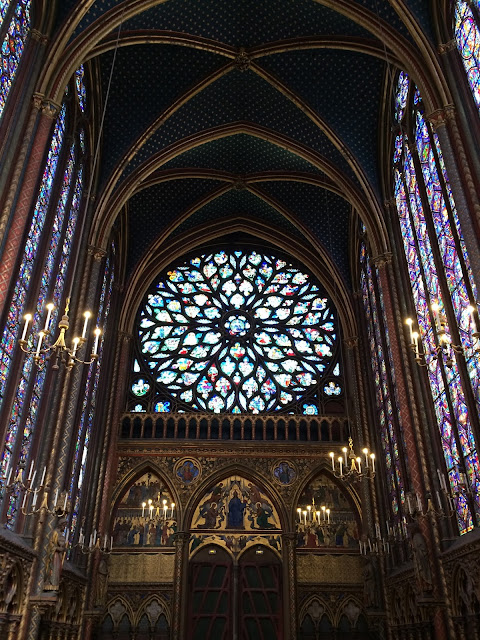 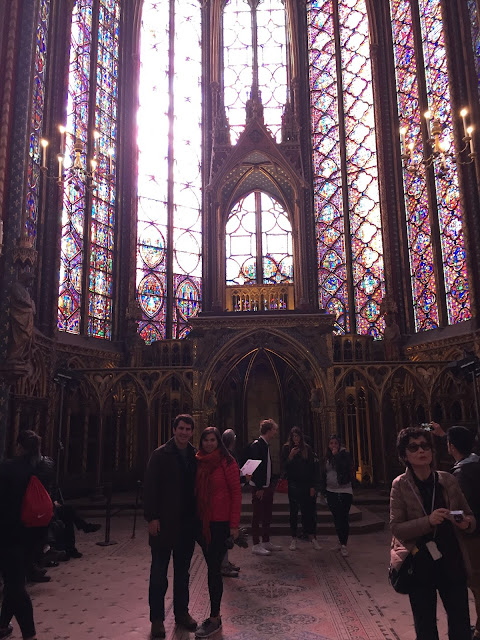 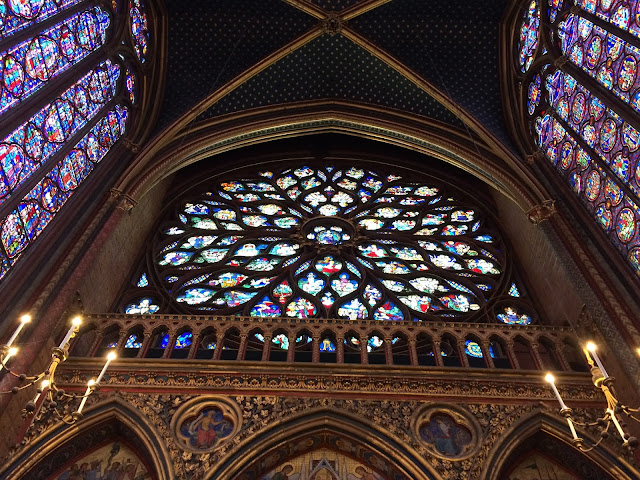 Mmmmm ok so those pictures don't do it justice.... the chapel is seriously one of the most beautiful spaces I have ever been in. So majestic.

From Saint Chapelle, we walked down Boulevard Saint-Germain to Rue de Varenne to visit the Rodin Museum. We didn't know that much about Rodin or his statues, but the gardens were stunning! Definitely one of my favorite outdoor spaces in all of Paris. I will forever remember the Rodin gardens as the place where Michael and I switched socks because my feet were so cold. I'll also remember Michael impersonating nearly every statue we walked passed. Why I don't have a picture of him doing that, Lord knows. Actually... I do know. I wasn't about to sacrifice my hands to the elements and take off my gloves to take a picture. It was cold, I'm telling you!


We then took the metro over to Le Marais, one of the oldest parts of Paris -- the 3rd and 4th arrondissements -- that is full of culture and lore. (Wait, where in Paris is that not the case???) Everyone, and I mean everyone, who gave me recommendations about where to eat in Paris all mentioned L'as Du Falafel (32 Rue des Rosiers, 75004). It's a walk-up falafel joint right in the heart of the Jewish quarter, so you'll want to make sure you brush up on your Jewish holidays to make sure it's not closed (and don't go during the Jewish Sabbath from Friday evening to Saturday evening when it's also closed.) Michael counts his falafel sandwich as one of his best meals in Paris, so there's that. I was pretty underwhelmed, but again, blame it on the baby messing with my tastebuds.

The streets right around Rue de Rosiers are filled with perfumeries, and high (and sometimes low)-end jewelry, clothing, and knick-knack stores. It's a wonderful place to stroll. And stroll we did... right on down to Place des Vosges, the oldest square in Paris. It was originally built for the city's poor, but now it is some of the most sought after real estate in the city. Victor Hugo lived here for 16 years in the 1830s-40s. Pretty cool.

From there, we walked down Rue de Rivoli en route to the Louvre, but providentially made a detour at Le BHV Marais (52 Rue de Rivoli, 75004). I say 'providentially' because Michael was kicking up his heels in disgust about going into a department store in Paris (this is actually how most Parisians originally felt when department stores first opened in their chic city,) but I was on a mission to find a gift for Liza Love. And, I really wanted to see BHV. My friend Elizabeth had said that you can literally buy anything there except groceries. It is like a cross between Target and Nordstrom, except definitely a lot nicer than Target. Two friends had told me about the British brand, Cath Kidston, that makes wonderfully and brightly patterned bags, umbrellas, clothing and lots more, and I was hoping that BHV carried that line. Well they did! We picked a jewelry box with a wind-up twirl ballerina for Liza Love. Five months later, she still loves it! Success.

We then went to the Louvre. As much as I love history, and art history is obviously a part of that, I feel like I'd need years and years and years to learn everything there is to know about the art in the Louvre. And like twenty masters degrees. Sooooo instead, we listened to the Rick Steves Louvre audio tour. It's the perfect guide to let you see the major works of art, and it gets you in and out of that labyrinth in a little over an hour. Victorious. 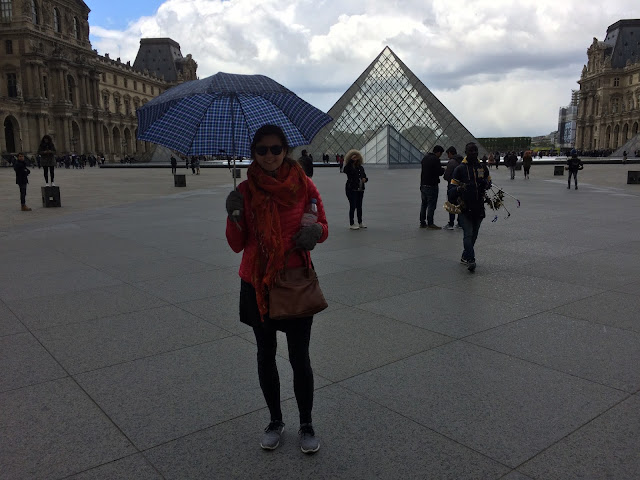 I remember seeing the Mona Lisa when I was in Paris when I was 18, and being so so so surprised at how little and basically forgettable I felt like it (she?) was. I more or less had the same impression this time as well, and it was far more interesting to watch the spectacle of people wrestling their way forward to see the painting than looking at the painting itself. I feel like it could be on the wall of a French chateau surrounded by a hundred other paintings and no one would ever notice it. I'm certain that what I'm saying is blasphemous to the art historian's ear, but I mean, the Mona Lisa underwhelmed me! So there's that. 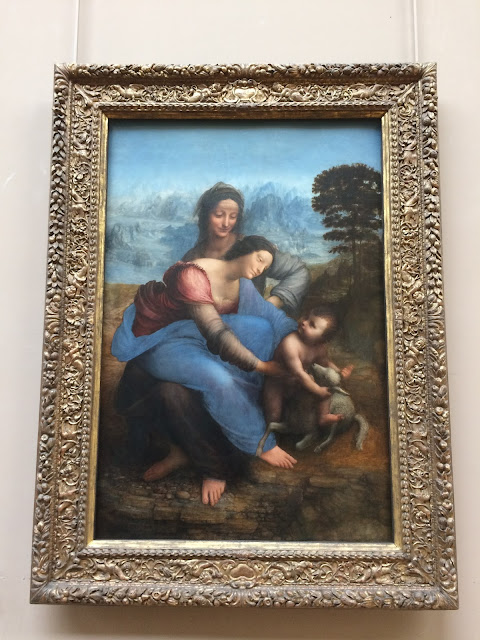 My favorite painting was Da Vinci's The Virgin and Child with Saint Anne. It's beautiful. Mary sits on her mother's lap while reaching down to hold (and I think pull back) the infant Jesus, who is leaning forward towards a lamb, of course foreshadowing his death as the sacrificial lamb. It's moving to me because now being a mother, and looking at Mary's love for her child in the painting, it's so painful knowing that she will lose him as her son. That she is trying so hard to grasp him and hold him... yet he is the son of God. So was he ever really hers in the first place? Truly something to "ponder in her heart."

After the Louvre, I was famished so we stopped at a crepe stand right outside the museum's exit. Big mistake. That ham and cheese crepe was the one and only gross thing I ate the entire time in Paris. Oh well. It got me through the next adventure of going to see Monet's water lily murals at the Orangerie. Apparently the thing to do is to have your picture taken while you stare into the abyss of depth and color on the panels. I thought that was ridiculous so Michael took a regular photo of me in front of them: 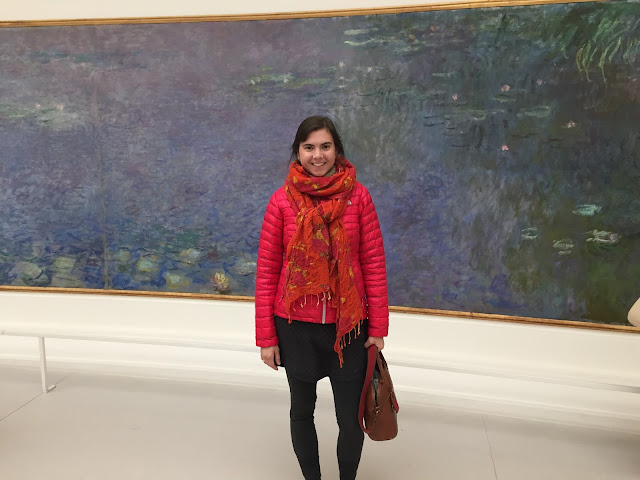 But then we caved and I pretended to be a fabulously curious art lover, and he snapped this pic: 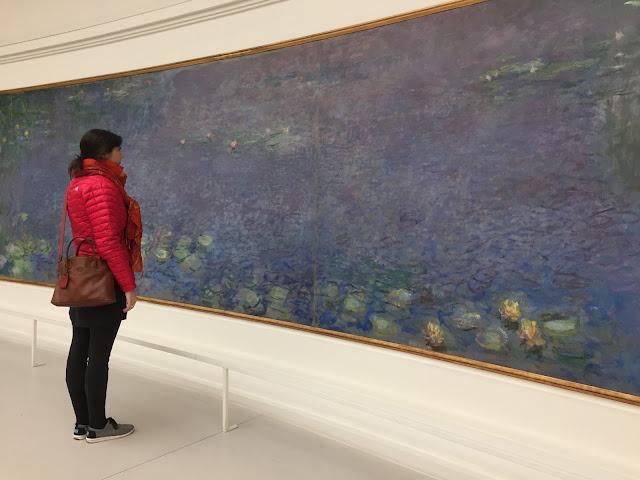 Regardless of how we took pictures, Monet's water lilies are super beautiful and we really loved seeing them. I would love to go to Giverny one day and see where Monet painted them.

From the Orangerie, we raced home along the Seine to make it back to our flat before a monstrous thunderstorm. We rested during the rain, then ventured out in the gleaming streets in search of dinner. This was the night that we nearly committed culinary suicide and tried to pick a restaurant on our own without a trusted recommendation. (I mentioned this escapade in Paris: Part 1.) Oh man, it was such a failure. We hightailed it out of there and instead went to Casa Bini (36 Rue Grégoire de Tours, 75006,) a charming Italian restaurant that our lovely AirB&B host had again recommended. The meal was amazing and the constant stream of freshly baked bread was A++! 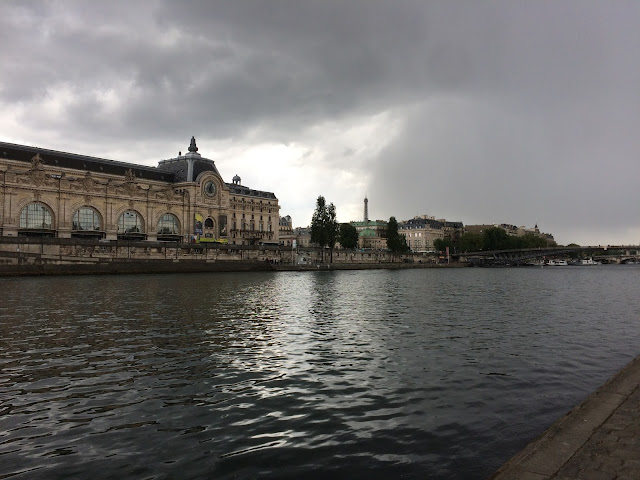 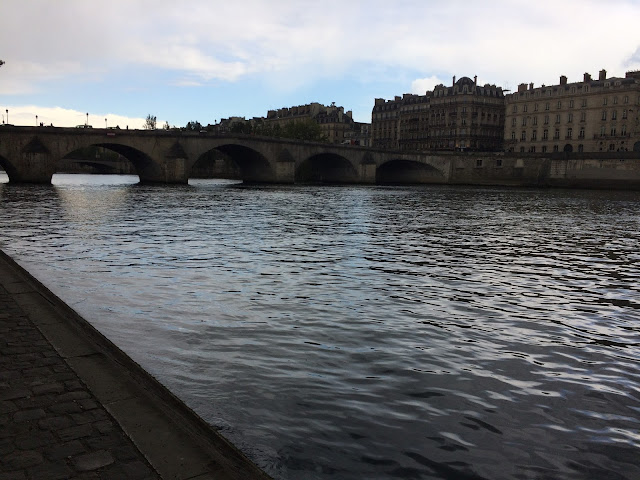 If you are still reading this long-winded saga of our time in Paris, you are my favorite and you are amazing. Pretty sure I only have one more post to write, and then maybe some restaurant recs and then I'm done forever. At least on the subject of Paris. Annnnd not really forever.... just until we go again and I can eat and drink to my heart's content! I think Michael would also reallllly like to go back to Paris when his wife isn't a pregnant, hungry dictator.