On our first full day in Paris, we slept in and had a light breakfast in our flat before walking to the Musée de Orsay. Even with the Paris Museum Pass, we waited in line for 40 minutes before getting inside. This sounds like a long time, and it was fairly freezing out, but time passed quickly because we ran into a girl I knew from DC traveling with her husband and parents, the Italians in line behind us chatted with each other non-stop, and we saw one of only two scenes of Parisian rudeness (if you can even call it that) that we witnessed on the trip. It was between two elderly, elegant Parisian women in the VIP museum line who were yelling at each other because one cut in front of the other. It was great. Elderly Parisian catfight great.

Michael especially loved the art and could have stayed in every museum much longer, but his pregnant wife (me) needed to keep moving to find some food. I haven't mentioned yet that I was 8 weeks pregnant while we were in Paris and felt nauseous if I didn't eat every hour or if we stood still for too long. I think I may have been like a little drill sergeant -- I marched us around the city from patisserie to crepe stand to pizza place the whole time. Blame it on the baby!

From the museum we walked across the Seine through the Tuilieries Garden to Pret A Manger. My Durham friend Amelia told me to look up a couple of Pret locations throughout Paris for an easy sandwich and coffee stop. This was great advice especially because a lot of French food didn't sound that appealing to me. I used to eat at Pret in DC and didn't realize it was an international chain, so I was thrilled to find it again in Paris.

From lunch, we walked down Rue Saint Honoré and Rue de Rivoli to the Palais Royale. It's been so long that I can't really remember why the Palais is significant (but it is!).... but it's beautiful and has a gorgeous garden.

Paris is a city of beauty and people come from all over the world to capture it however they can. Everywhere we went, there were always art students sketching the architecture or statues or fountains or gardens. And they always seemed to never have enough clothes on! It was cold, I'm telling you, and most of these kids had on light button-down shirts and jeans, no jackets. Weird.

As I am writing this out, I am realizing that all we really did in Paris was walk around the city. Our feet ached at the end of every day, but the best way to really live and breathe in Paris is by foot. My favorite time in Paris happened now. We left the Palais Royale and walked along the right bank toward Ile Saint Louis, the smaller of the two islands in the Seine. We crossed over a bridge onto Ile de la Cité and came across a tiny Parisian street with a minuscule restaurant claiming to be the oldest restaurant in Paris (who knows about the truth of that claim... I feel like all the restaurant owners told us something similar) with beautiful wisteria climbing the walls. Walking down this street, we came to the bridge, Pont Saint-Louis, that connects the two river islands. 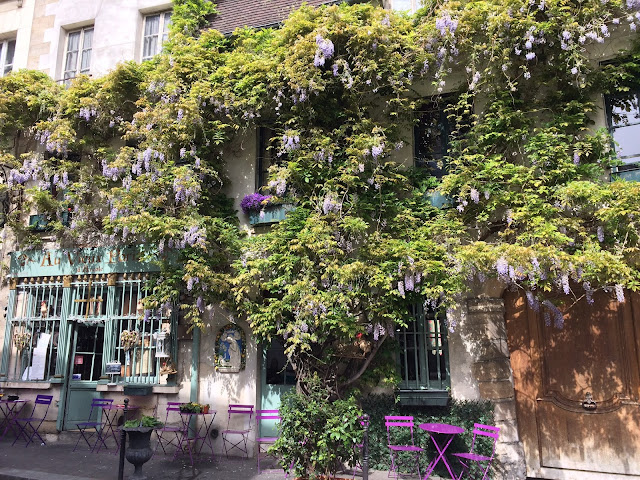 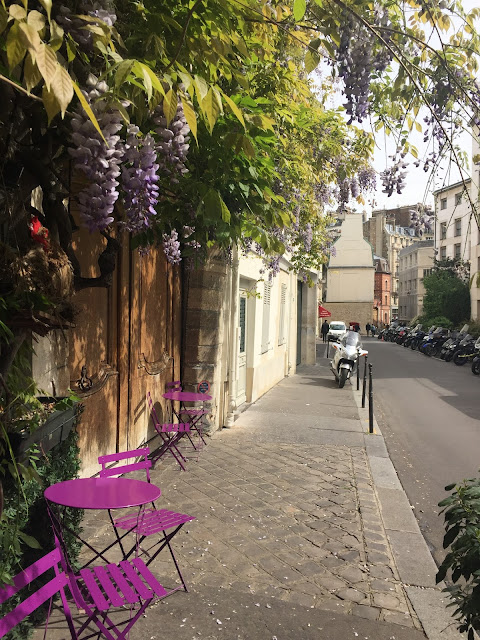 On the bridge, there was a 4-man band playing Belle Epoque music... lively, upbeat, banjo-esque, perfectly French. To me, standing there on the bridge overlooking the two islands, with Notre Dame at our backs, listening to iconically Parisian music as an adorable old man with a white mustache rides by on a bicycle..... THIS was our Parisian moment that I didn't know we were looking for. It was perfect.


I wish I could figure out how to put a video on here so you can hear the music, but I can't. If you look at my instagram (@cbcatalino) and scroll back to Paris photos, it's there.

From there, and this was the whole reason why we had decided to walk to Ile Saint Louis, we wondered around the island looking for Berthillon Ice Cream Shop (29-31 Rue Saint-Louis en l'Île, 75004) which is pretty hard to miss.... unless it's closed! As it was that day (it's closed Mondays and Tuesdays.) For the silly tourists who fail to check these details, thankfully there are lots of little pop-up shops all over the island that sell Berthillon ice cream, so we still got our fix. Apparently there blood orange flavor is to die for, but I opted for white chocolate. Honestly, we had ice cream or gelato everyday, and I loved every place we went! There is a gelato chain called Amorino which I liked a lot (annnnnnnd I just googled it and they are all over the world... including Raleigh, NC!!)

To our backs from the bridge where the musicians were playing, we stumbled across Notre Dame. It seems dumb to say "stumbled across" since Notre Dame is .... well... Notre Dame. Like the Eiffel Tower, it's iconically Paris and a dominating landmark, but we didn't realize that the back of the cathedral had stunning architecture and a beautiful garden that was nearly empty of people -- something completely contrary to the cathedral's front entrance and square that was awash with humanity.

Being in Paris (especially having recently read Paris: The Novel) among so much history and culture and stories and lore and all of the life of the city, Notre Dame especially is amazing to me. Construction started in the 12th century.... the 12th century! Just imagine the millions of people who have come to worship there, or who desecrated the building during the French Revolution, or who have simply walked through the cavernous nave to view the beautiful rose windows. I love it.

After the cathedral, we walked back to our flat on Rue des Grands Augustins (a mere 10 minute walk. Glorious!) and rested before heading out to dinner. I had carefully planned all of our dinners at restaurants that had been read about and recommended, but again, I couldn't stomach most French food and pretty much only wanted pizza or pasta. (I put a list of great restaurant recs at the end of the Paris: Part 4 post.) So instead of the amazing soufflé place I had hoped for, we instead went to Luisa Maria, a Napolitano-style pizza place near the Luxembourg Gardens that our fabulous AirB&B hostess recommended (12 Rue Monsieur le Prince, 75006). It did NOT disappoint. It was SO GOOD. Another realization as I write this: I was starving by the time we ate dinner each night so have ZERO food pictures.... except for this amazing McDonalds egg McMuffin I had one morning: 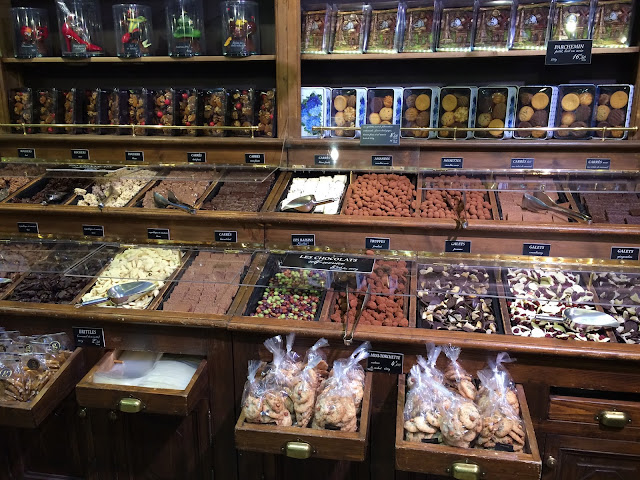 I mentioned previously how much we loved our neighborhood of Saint Germain. It is FULL of charming streets for shopping, dining, and cafe people watching. Rue de Buci and Rue de Seine are especially wonderful.


The 6th arrondissement of Saint Germain bleeds right into the 5th, aka the Latin Quarter. Although right next to one another, they are night and day different. Just walking down Rue de la Huchette transports you from the sophisticated and stylish Saint Germain into a whole different world of university bars, loud music, walk up fallafel or crepe shops, dance floors, and students huddling in small groups as they smoked. A totally different vibe! Friends had recommended a couple jazz bars and late-night haunts, but we never went because of our exhaustion at the end of each day (and because I couldn't drink.) Our last stop of the day was at Shakespeare and Co, the English language bookstore made famous by Ernest Hemingway and other "Lost Generation" writers of the 1920s.


With aching feet, we walked back to our flat and again slept like babes.