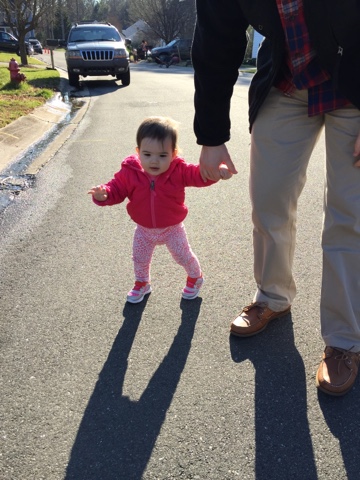 It's been nine months since we moved away from DC. And it's been nine months of not a single day going by without something triggering some thought, memory, person, scene, or scenario from our life there. I might be in the grocery store buying apples and recall my love affair with the amazing apple selection from the Georgetown Safeway (best apples ever!) I might be taking a walk around our neighborhood lake and still expect to see hundreds of people by the water before I remember that Durham, North Carolina is a lot less densely populated than Washington, D.C. I might be looking at Instagram and notice that a DC friend posted a pic of a new Georgetown restaurant and momentarily forget that I don't live there as I get excited to try it out.


The first several months in Durham felt to me like an extended stay in someone else's house. It felt like we were just waiting for another away rotation to be over so we could return home to our Georgetown apartment. I couldn't believe that I actually had to load Liza Love in the car (gasp!!) and drive to the grocery store instead of walking there in five minutes. And with that, of course, came a little something called MEAL PLANNING which I had never done before in my life. I learned pretty quickly that I better jump on the meal planning bandwagon or I was going to spend my life loading LL in the car and driving back and forth to the store to buy food for dinner.


I've also noticed how much one season changing to the next creates such a longing in me for my old city. When summer slowly turned to fall, I daydreamed about the city-wide phenomonon of women switching from sandals and skirts one day to boots and leggings the next. I can hear the clicking of boots on brick sidewalk, I remember the excitement when pumpkin-spice lattes came out, and how crazy the Halloween decorations are that show up every October in Georgetown. When DC got dumped with snow a few weeks ago, I so wanted to be there to be snowed in and forced to walk to friends' houses to watch movies and drink hot chocolate. And with spring right around the corner, I know that the tulips in our old front yard are going to pop up, red and welcoming, just like they did the previous four years.


I miss so much about Georgetown. So many things come to mind that were seemingly small and insignificant but meaningful to me nonetheless: the beautiful flowers on the corner of Q and 32nd Street and the big white retriever named Cody-Dakota who always lounged on the sidewalk; Montrose Park where I used to take a book and a blanket to read and sunbathe; walking by Los Cuates and always getting a wave from the waiters who knew Michael and me so well since we ate there all the time; the old lady named Joy who always (I mean always) wore all white and walked her little white dog, Valentine, everywhere she went; the cars honking in the morning on 33rd Street trying to turn left onto Wisconsin Ave.; Santos, our little waiter friend at Casbah Cafe, and his genuine excitement whenever we came in to eat; my favorite running loop down Q Street and up Mass Ave. and remembering the exact spot where I took a huge tumble once while running with Michael; the roses that climbed the wall of my friend Jessie's house; the waterfront and the throngs of people strolling hand in hand on every warm weekend afternoon; the kayaks and paddleboards on the Potomac; evening walks with Michael and peeking into the beautiful Georgetown homes and commenting on the usually gorgeous (but sometimes creepy) interior decorating; the African Union Mission across the street from our apartment and the kind chauffeurs who smoked and chatted as they hovered around their cars all day; the line at Thomas Sweets every summer night that always surprised me at how long it seemed but how short the wait actually was; Michael's walk down Resevoir Road to the med school and how I sometimes would surprise him and walk home with him at the end of the day; the crazies who stood in line at Georgetown Cupcake waiting for a little sweet treat; the little Italian women who stuffed raviolis in the window of Filomena; the hidden streets and quiet gardens that Michael and I loved so much; the black SUVs always sitting outside of Secretary Kerry's house on O Street; the insane Georgetown undergrads who never had coats but always had the tiniest skirts on while going to bars in the middle of winter; sitting at the Volta Park Pool and overhearing a wide range of conversations - from where to buy weed to how to teach your child to swim; and Book Hill Park and how much I loved going there for a quick jaunt outside, even with the homeless men always asleep on the benches.


I realize of course that now with a little one in tow, much of these things (like the fun of being snowed-in) probably wouldn't hold as much as the charm now that they do in my memories. And I'm certainly not forgetting that there are so many things about DC living that were hard (like trying to drive anywhere between 4 and 7pm.) But we lived in a historical and influential and often crazy city that deeply impacted our lives. I wrote this recently in an email to a friend:

GIRL. Can we have a moment of lamentation for DC?? Not a day goes by when I don't miss it. Actually, LONG for it. I miss the people and dear friends of course, but I think what I feel on a daily basis is more of an innate missing for the city as a whole. The traffic, the sounds, the people out walking their dogs, my local Georgetown spots that I knew and loved, the weather, the changing seasons, my runs (that had turned into walks with a stroller by the time we moved away last May) up Mass Ave. past the embassies, the "important" feeling you often had because you knew you were living in an "important" city, walking to church in Chinatown, the amazing restaurants a stone's throw away, the history of the place.... oh I could go on and on. I miss it deeply and often think about what it would have been like to still be there even with Ms. Liza Love.

We are really happy in Durham, but it's quite different. It's slower here, and I don't think that it's just because I'm home more often than I was before. Michael and I knew we were going to really miss DC when we moved away, but to my surprise, even Michael has said that he could see us moving back there, or to another big city, in the future. Of course, that is still at least seven years away, so who knows what our lives will be like then.


But for now, I miss DC. It's been nine months and we are definitely where we are meant to be, but it's not easy to let go of a city that you lived in, loved in, and that shaped so much of you. It's where Michael and I spent our first fours years of marriage -- and those are some special years. I hope that we can grow to love Durham and Chapel Hill in the same way.  It's where we are!

Email ThisBlogThis!Share to TwitterShare to FacebookShare to Pinterest
Labels: Georgetown