The Two Best Books of Summer

THIS IS IT. The final week of summer is upon us. And if you haven't yet found the perfect summer read, I'm here to help you. Here are the two best books I read this season. Let's get right into it. 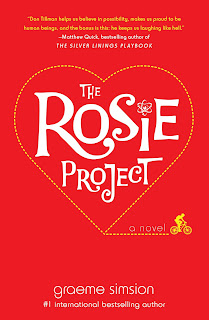 The Rosie Project is the hilarious and heartfelt story of a socially awkward genetics professor looking for love. He creates a survey to weed out the smokers, drinkers, unfit, unintelligent, and the always lates, and yet he finds himself falling for a woman who is all of these things and more. This story had me stifling LOLs late into the night while poor Michael slept next to me. I'm pretty sure I haven't laughed so hard reading a book in ages (I will never forget the dance scene.) Annnnnnnnd, always something to make me happy -- The Rosie Project is being made into a movie!!!!! With Jennifer Lawrence. I. Can't. Wait. 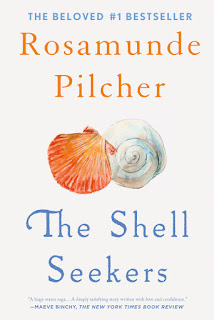 Rosamunde Pilcher wrote The Shell Seekers in 1987, but I read it recently because the cover caught my eye at a recent BJ's run (yes, I judge books by their covers... who doesn't?) Bottom line -- it's a sweet story about a matriarch of a British family reflecting on her life. It's set in 1980s England and Ibiza, but a large part of the book takes place during World War II. Beautiful and compelling, this book has it all: love, heartbreak, family drama, art, war, lasting friendship and beautiful settings. It's the kind of book that makes you want to curl up with a cup of tea on a rainy day, but also run to the ocean and jump in. Read it!

Right now, I'm reading Pat Conroy's The Great Santini. I simultaneously love and hate Conroy's books. He is the one of the best storytellers I've ever read, but often with the most disturbing stories. We'll see how this one goes.


After that, I plan on reading The Martian! In a compulsive fit of spending, I dropped a whopping $5 on this book at the grocery store yesterday.  The Martian is not at all my typical read (it's about an astronaut stuck on Mars and his survival and rescue.... that is NOT my genre,) but let's be honest, Matt Damon's face is on the cover because the movie version of the book comes out in October. Need I say more?? We all know that the best part of Interstellar was when they open the space sleeper machine and Matt Damon pops out. Surprise! So I'm sure another space movie with him can't be too bad. And The Martian is apparently really funny despite the serious nature of being stuck on Mars and fighting for survival.

Email ThisBlogThis!Share to TwitterShare to FacebookShare to Pinterest
Labels: books

I don't know what happened, but all of a sudden I am not so sure how I feel about summer.

I knowwww. It's basically blasphemy to even suggest that summer is less than the best. This is coming from the girl who would live at the pool with an endless supply of books and LaCroix and not move until her tan was strong enough to last through December, or the world ended -- whichever came first.

I will now bury this dream and not re-awaken it for about 15 years. My friend Courtney recently sent me this hilarious article about the difference between a trip and vacation. It's well worth a glance. After reading it, I said that I guess we are going on trips for the next two decades.... but then changed my mind and said just one decade since teenagers can handle themselves. She replied and said teens just add a whole new level of chaos:

"No you cannot bring your boyfriend on our family vacation."

"No you cannot have alcohol with those strangers on the beach."

So much to look forward to. Liza Love and I will be going to the beach next week so we'll see how that goes.

I actually do know what happened about my changing summer feelings: baby girl came along. It takes about 3 minutes for us to be outside in the roasting North Carolina heat before Liza Love turns beat red and starts going comatose. AKA not what you want to have happen to your baby. Even at the pool, we are in the water for maybe 15 minutes before she gets bored, and then I sunbathe in the sun and put her in the shade, but then, like I said, after 3 minutes she's not looking so good. So we go home.

Anyway.... with this roasting North Carolina heat, I've been wanting some cool summer dinners. So I made one this week. It was delicious. And I want to share it with you. I titled this post "Summer Dinner Sampler" but I don't really know what that means. What is a "sampler?" As in, you're just supposed to "sample" and not eat a full meal? If that's the case, disregard the title. We definitely eat over here. 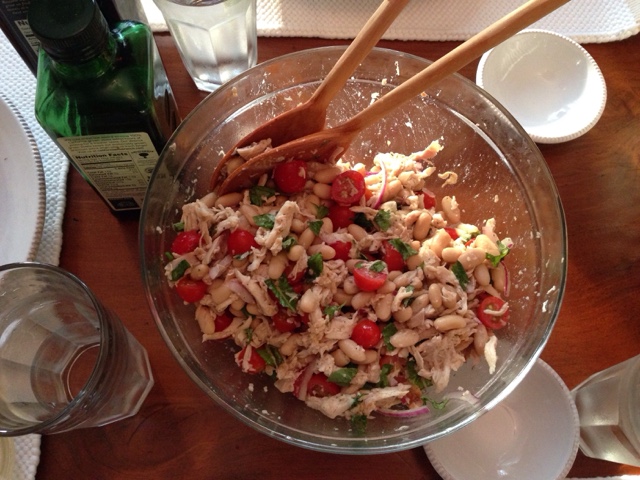 We had this White Bean and Roasted Chicken Salad. My friend Brandi texted this recipe to me from her beach vacation, and it is the best. She and I both used cherry tomatoes instead of whole. Note: I thought the dressing was super vinegary so I added a bit more olive oil than it calls for. 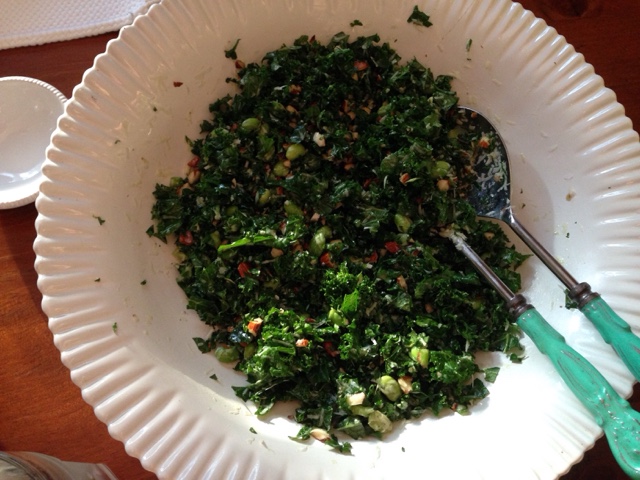 We also had Kale Salad. I chopped up some kale, threw in some cooked edamame and chopped almonds, and then did everything that this salad recipe tells you to do. Shredded parmesan, salt, pepper, and a simple lemony dressing. Healthy and awesome. Another note: I thought this dressing was not lemony enough so I used more fresh lemon juice.

In Charlottesville this past weekend, my friend Carrie made roasted sweet potato rounds. Ok actually, I made them, at her house, under her direction.... but I went a bit overboard with the salt so watch out for that. But they were great and I think will be a new staple for me. All you do is slice up the potatoes, season with olive oil, salt, pepper and cayenne pepper, and bake on a baking sheet at 400 for about 20 minutes. 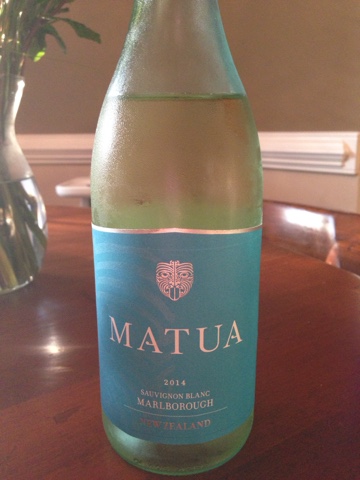 We drank this wine. This is the third bottle I've purchased of it because we think it's pretty dang good for hot summer evenings.

For dessert, which I forgot to photograph, we had fresh berries and homemade whipped cream. Light and heavenly!

Whip the whipping cream with a standing mixer or hand blender at high speed until soft peaks form. Add the vanilla and slowly add the powdered sugar. Beat on high until stiff peaks form. Chill. 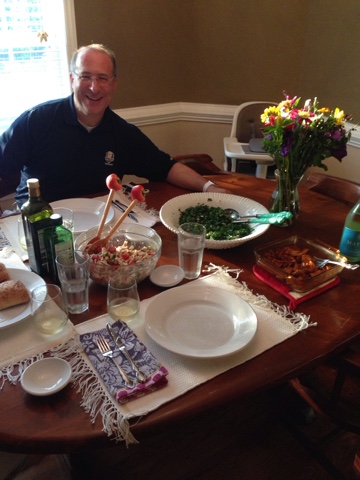 This is the whole spread with our dear friend George who came over for dinner last night. 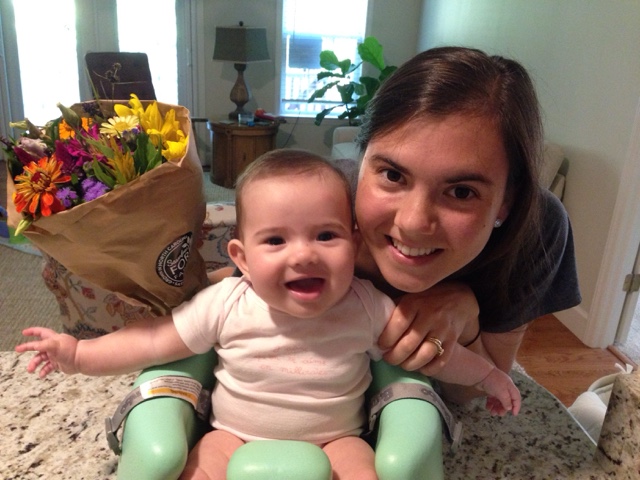 And Michael brought home the prettiest wildflowers from Sassafrass Fork Farm. Love love love. Wouldn't it be wonderful to work at a flower farm?? 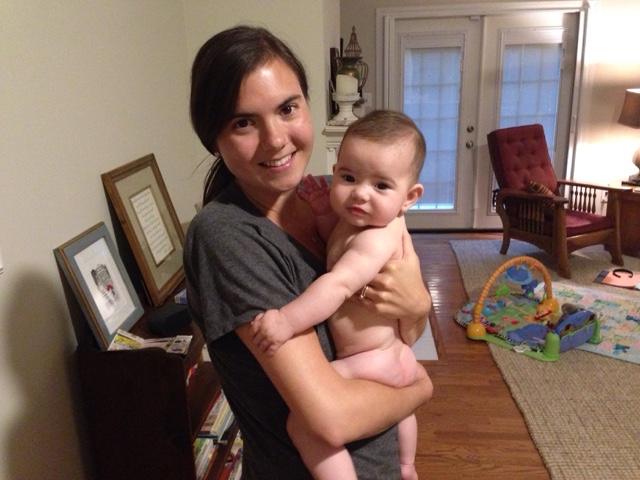 And then Wrinkle Butt had a bath!

Go and make someone happy and cook them this summer dinner.

(This has nothing to do with this post, but seeing that I mentioned four friends who enriched my life in the past few days by telling me about funny articles and good recipes and eating my food, it goes without saying that I love the people in my life. My people are good people.)
Posted by Carey Beth at 3:30 PM 5 comments: