Times flies when you are on the move! But here I finally am, sitting still, on the first cold and grey day of the year, at home in DC, cherishing some moments of stillness. Here:

We've been back from Nashville for about two weeks but really it hasn't felt like that because Michael has flown to five interviews since being back, I spent five days in Dallas, and I just dropped Michael off at the airport this morning for another flight out. After two months of not being in DC, it has been a tease to be home but still so much on the move. I can't wait for Thanksgiving -- it will be a full week of us both being in one spot (upstate New York! brrrrrrr) and it will be phenomenal.

Being in Nashville for October was really fun. By the end of the time, I was REALLY excited to get back to DC, not because Nashville was a drag (far from it), but just because after two months of being away (we were in Durham for September,) you really just want to be back in your own home, in routine, cooking your own meals, seeing your friends, etc.


Here's a little story about Nashville hospitality: upon driving into the neighborhood where we were staying for the month, I mistakenly directed us to the wrong house. I had Google street-viewed the house where we were staying, and it was red brick with columns. Well, the house I mistakenly pulled up to was red brick with columns, too. (NOTE TO SELF: check the address. No duh.) The family had told us to let ourselves in and make ourselves at home, so Michael and I pulled the car around back and started unloading. About 5 minutes later, a car pulled up with a husband and wife giving us some major "what the heck are you doing" stares. I had never met the family before (we were staying with a doctor friend of Michael's) so I marched right up and introduced myself like it was the most natural thing in the world. Welllllllllllll -- it took about negative 2 seconds to figure out that we were definitely NOT at the right house. Whoops, small mistake. But here's the thing: Bill and Sherry were so nice. I mean SO NICE. They honestly could have shot us for breaking into their house. (They would have been in the right.) But instead, Bill in his cowboy boots and Sherry in her sweet southern smile just thought we were dimwits and kindly pointed to their neighbor's house across the street and waved us on our merry way.

So that's how we came to Nashville. Not getting shot at. A good start, I'd say.

Our first Sunday in town, we heard a pretty politically-charged sermon that hit on issues of abortion, women's roles in the church, and homosexuality. All in the same sermon. Welcome to the south. I leaned over to Michael and said "this would never happen in DC!" But it was surprisingly refreshing, the preacher was honest and Biblically sound, and it led to some good discussions. On repeated occasions, I also noticed families and groups praying at restaurants before their meals. I about fell out of my chair each time this happened because it's been so long since I've seen a family do that. Again, so refreshing.

There's a radio show on one of the country stations in Nashville called the Bobby Bones Show that I'd listen to every morning in the car. Now, if you pay attention to SEC football, and you really have to if you live anywhere south of the Mason Dixon Line, then you will know that Katy Perry was at the Ole Miss-Alabama game and predicted that Ole Miss would win. Which they did! It was the best. Katy Perry also publicly said that she's got the hots for the OU quarterback and that she wants him to call her. Well, this topic was being discussed on the Bobby Bones Show, and they were debating if the OU quarterback should actually follow through and call Katy Perry. Lo and behold, it was revealed that the OU quarterback has a girlfriend, and so the consensus on the show was that he should remain faithful to his girl and most definitely not call Katy Perry. WHAT! I was blown away that fidelity was winning the day. In this day and age, I guarantee that nearly all talk shows would totally advocate for the OU quarterback giving Katy Perry a call, girlfriend or not.

The point of all this is that the south, at least what I noticed of it, thankfully hasn't lost it's sense of faithfulness, charm, and southern hospitality.

I also have a renewed appreciation for country music -- namely Eric Church. I don't know where I fell off the country bandwagon, but I am happily back on it now.

Two things surprised me about Nashville: how big it is, and the traffic. Since the city has grown exponentially in the past five or so years, these two things naturally go together. I think especially coming straight from Durham where there was barely any traffic ever on the road, I didn't love sitting on Hillsboro Pike for 20 minutes just to go get some ice cream.

The very very best thing about Nashville is that I got to spend time with some of my best friennnnds!! Three UVA besties live in Nashville and are wonderful and brilliant and we're getting married are all doing amazing things in healthcare. I totally zonked on getting lots of pictures of these three women and their cute men, but we shared some good meals (my friends can cook, let me tell you what), some great walks at Percy Warner Park (one word: hills), a bachelorette celebration, and I even got to see this little babe get baptized:

Let's talk food for a second -- Because the food scene is growing pretty fast in Nashvegas, I didn't really know where to go eat. There are lots of choices, and lots of what I felt like where either casual places or high-end places with not a lot in between. Some of my favorites are - 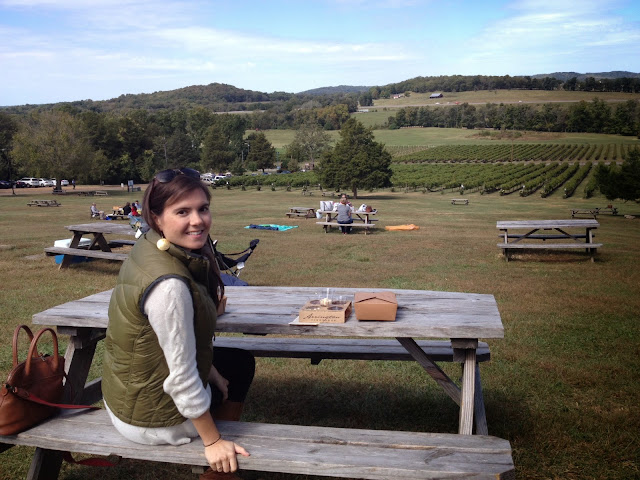 I think there are more, but I can't find my little list of restaurants that I made so that's all for now.


All in all, being in Nashville was a treat. Michael really liked the program at Vandy, and I enjoyed getting to know the town. In March, we will find out where we will be living for the next seven years (7 YEARS!) If we end up in Nashville, I think we'd do just fine. But I think this is true of wherever we end up!

Email ThisBlogThis!Share to TwitterShare to FacebookShare to Pinterest
Labels: travel