Michael and I are in Durham, North Carolina for the month because he is doing an away rotation at Duke. From here we go to Nashville for most of October for another rotation before returning home to DC. It's a mini adventure! 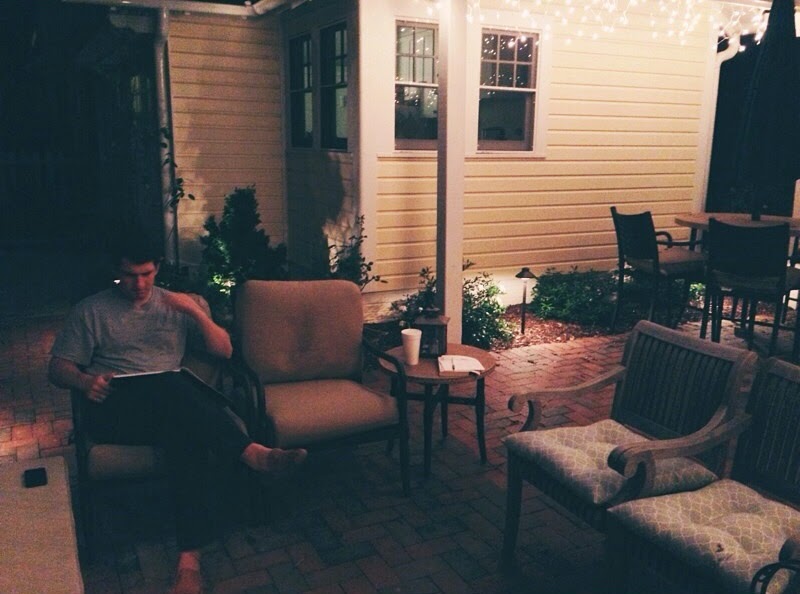 I had no idea that I'd feel this way, but it's been surprisingly nice being out of the city. Well, I mean, Durham is a city, but honestly it feels like a small town compared to DC. Simple everyday things continually amaze me -- like how you can get anywhere in 7 minutes. Even places that are 10 miles away, no sweat. Just pop in the car and you'll be there in 7 minutes. There is literally no traffic. It's weird. And there is always parking anywhere you go. MIND BLOWN. We've been in DC too long. (This is not a diss on DC, just a discussion about city-life making me tired.)

There is also a Chick-Fil-A about four blocks away. This is cause for celebration, wouldn't you say? Hey? Ok? Par-tay? Soufflé?

Bottom line: the pace of life is slower here, and I really like it. It's balm for a weary soul even when I didn't know my soul was that weary. For Michael, he spends most of his waking hours at the hospital so you'd think he'd be exhausted but man oh man, he is ON FIRE when he comes home at night. His long days energize him instead of draining him because he LOVES what he is doing. For me, it's the best thing in the world to see. ("On fire" is perhaps a tad of an exaggeration. He is on fire for about one hour before we both fall asleep. I swear, we're 90 years old.)

I have a few favorite things lately that I wanted to share. Take 'em or leave 'em!

1) New song to love: Spencer Combs and Holly Maher - You Are Mine. It's a little breathy kind of like Joshua Radin, but I meannnnn it's so romantic. I actually found it because it's the song that goes along with this ad for a baby bassinet, but whatever. The song's about love and it makes you want to love your man better. Or watch a romantic movie...

2) Which I just did! I just watched About Time and it is so charming and sweet. I think I am behind the times on this one because I remember hearing about it when it came out last year. Well, I finally saw it. This is the best pick-me-up movie if you are ever feeling blue. You can't help but feel good about life after watching it, not matter what age and stage you are in.

3) I also have another movie rec: The Hundred-Foot Journey. I read the book six months ago and wanted to basically eat the pages, and the movie is the same way. Except I felt like the movie is less about the food and more about the characters -- all of whom are charming and dear. Annnnd I think that now's a good time to move to France.

4) I have a new favorite person to follow on Instagram: Reese Witherspoon. She is totally the girl next door with a few glamour shots thrown in for good measure.  She posts about china patterns and her chocolate lab and the movies she's working on. She is kind of goofy and of course she's Southern and she likes to read. I want to be her friendy.

5) Being pregnant is nuts. The one thing I want so badly, I can't have: a spicy tuna roll with lots of soy sauce and wasabi. Be still my heart. Oh and a margarita. Not in the same meal, but I'd love a frozen margarita. I recently learned about a wine region that I didn't know about before and since I'm not drinking, you should! It's the Douro wine region in northern Portugal. It's far better known for its port wine production, but it also makes magnificent red table wine. And it's one of the most beautiful wine regions in the world. Here is an article about what to do if you go there, and here is an article from the New York Times with suggestions on what to buy.

OK, I'm over and out. Time to go exploring.

ps. THANK YOU for your excitement with us over the baby news! We are beyond grateful for the community of family and friends that this babe will be a part of.