I'm gonna give it to you straight. I'm in love with a green smoothie. 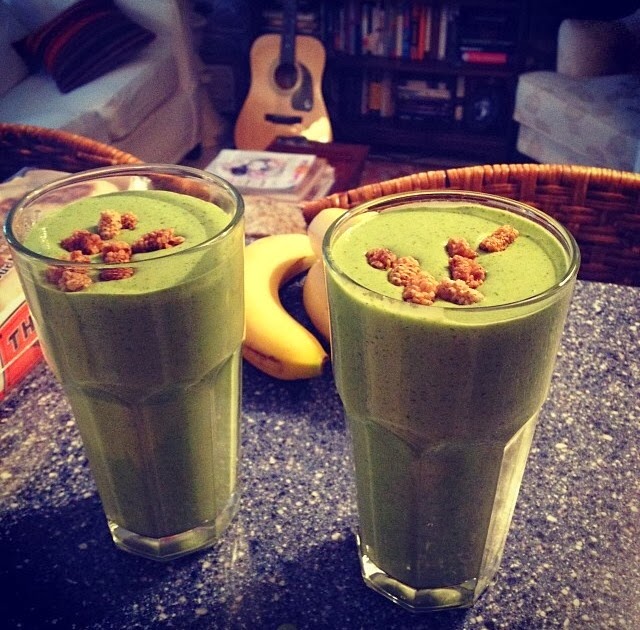 If I had a food motto, it would be: "Give your body what it wants." Unless all your body wants is chocolate and ice cream. But typically, I think if your body is saying "I want a roast beef panini!" Or, "I want a spinach salad chalk full of fruit and turkey!" Or, "I want stir fry!" Or, "Give me an omelet!" Then alright! Give your body what it wants. I've found that I am a happier person if I eat what I actually feel like eating, instead of eating what I think I should be eating, like a salad or only one slice of pizza instead of two. If I eat what I don't want, or not enough of what I do want, I'll just be hungry later and then probably fill up on sweets and then I'll be cranky. NO ONE WANTS CRANKY. I've also been wanting chocolate recently, so I bought some chocolate chips at the store last night. And they were milk chocolate, not dark. Because that's what I want! Send me to the loony bin.

By the way, I do work out. I think that helps with the "Give your body what it wants" theory. It probably wouldn't work out so well if you didn't work out. At least it wouldn't for me.

So, alllll that to say, I wouldn't typically go for a green smoothie. In fact, when I saw my sis-in-law drinking (or eating? Do you drink or eat a smoothie?) a green smoothie in New York over Christmas, I was like "Lo, WHAT IS THAT. Girl, you cray cray." Just kidding. I don't say "cray cray." But I was like "Lo, WHAT IS THAT?" Lora has celiacs (translation: gluten-free) so she is really aware of nutrition. And both Lora and Alisha (my other sis-in-law) are super healthy. They juice. JUICE! They juice lots of things like carrots, celery, beets, lemons, swiss chard... you name it. I was rather skeptical of these healthy sisters until Lora made me try her green smoothie. And Alisha brought home some beet-red beet juice with lemon that I tried too.

Put everything in a blender and mix away. Sprinkle a few mulberries on top, just for kicks.

Now, I know what you're thinking. WHAT THE HECK ARE MULBERRIES! Let me tell you what: I DON'T KNOW!

But I did some research on these little mysteries, and on everything else in that smoothie that you nor I have never heard of.

Mulberries: It's a Turkish superfruit. They are high in protein, and can help lower your blood sugar and protect your heart.

Maca powder: It's an Incan superfood, and the lady at Whole Foods also told Michael and I that it's good for getting your groove on... if you know what I mean. According to the package, Maca powder nourishes the endocrine system, increases stamina, boosts libido (like she said,) and combats fatigue.

Spirulina powder: It's a natural vitamin from Hawaii -- what's not to love! It supports cardiovascular
health, eye and brain health, and boosts your energy and immunity. It also smells terrible.

Chia seeds: It's an Aztec and Mayan superfood. Basically these little seeds pack a huge punch: they boost your energy, they keep you full, and they have more Omega-3 than salmon.

Dates: They taste so good and are super high in fiber.

Kale: It promotes better bone health, a stronger immune system, and a better immune system... among SO MANY other good things. Kale is a winner. You don't taste it in the smoothie at all, by the way.

Almond milk: It's lactose and cholesterol free. You could probably do regular milk too. 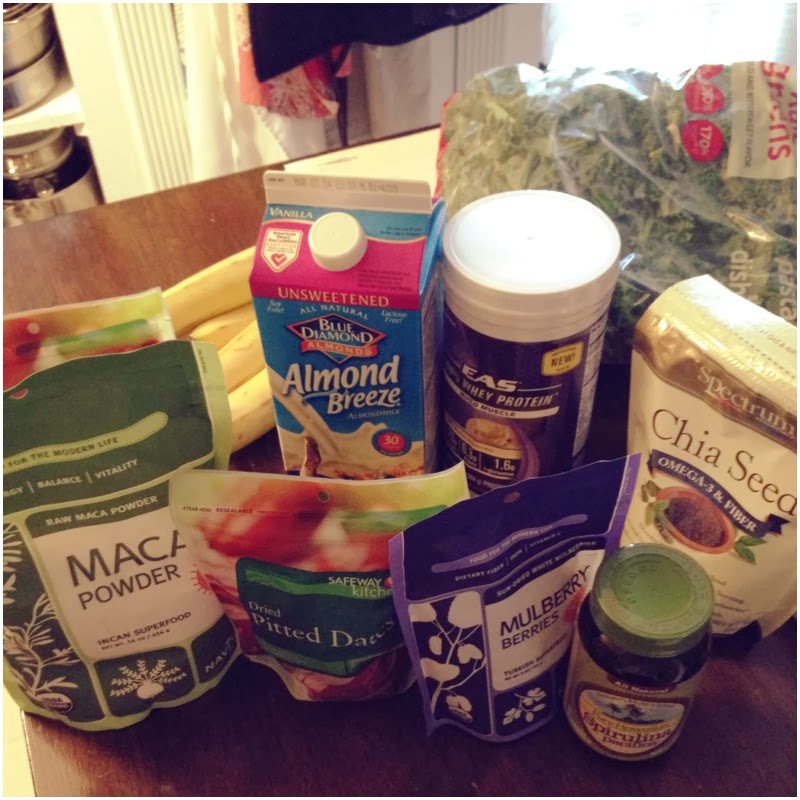 These ingredients can cost a pretty penny, but you only need to buy the powders/seeds once every few months. You also don't technically have to had any of this stuff to make it taste SO GOOD. You really only taste the peanut butter, banana, and vanilla protein powder. Add the kale, dates, and the almond milk, and you are good to go.

I double-dog dare you to try this smoothie. You will be a new woman! Or man! We are human beings, not human doings!

And then go dance in front of your mirror to Beyonce's XO. Because you will feel that good.