I remember going to the Sixth Floor Museum as a junior in high school in Dallas with my friends Leighton and Beth on an assignment for our AP US History class. Leighton was rushing through the museum, glancing at everything just for a quick second while Beth and I slowly and deliberately read the first panel. Leighton then ran over to us and said "Hurry guys! We have six floors of this stuff!" Oh Leighton -- history major she was not.

(It's called the Sixth Floor Museum because Lee Harvey Oswald shot Kennedy from the sixth floor of that building, the Texas School Book Depository....... not because there are six floors of the museum.)

It's not a typical choice, but if I could go back in time, one of the days I'd go back to is November 22, 1963. Just to feel the shock waves pulsing out from the center of the nation where the tragedy took place. Just to be an observer of the very event that would mark an entire generation. My dad was 16 in November 1963 -- the exact same age I was on September 11, 2011. I will never forget the shock of that morning when I first heard about the plane crashing into the tower as I sat in my 2nd period geometry class, and as it became readily apparent as the morning progressed that America had been attacked by terrorists. Peace had been ripped apart and trampled upon, regard for human life and welfare had been casually tossed aside, and not a soul in America wasn't affected by the news of that day. And although it was only one man on November 22, 1963, I think our nation felt the exact same way that day -- maybe even to a stronger degree. After all, Kennedy was not only the leader of the strongest nation in the world, but he was an a man extremely admired and a symbol of both American prosperity and morality.

Jim Denison, a pastor and writer in Dallas, wrote this about the assassination of JFK on the Denison Forum last week:

Landon Jones, the man who coined "baby boomer," said of the tragedy, "For the Baby Boom children, this was the most mesmerizing moment of their youth.  Time was frozen."  According to historian Todd Gitlin, "The educated young felt [Kennedy's] call, projected their ideals onto him.  His murder was felt as the implosion of plenitude, the tragedy of innocence.  From the zeitgeist fantasy that everything was possible, it wasn't hard to flip over and conclude that nothing was."
Author Stephen King believes the tragedy ripped away the veneer of an ordered world, leading to "a universe of horror and loss surrounding a single lighted stage where mortals dance in defiance of the dark."  According to Steven Spielberg, "Kennedy's assassination started a chain reaction—a kind of house of cards started to come down, not immediately but gradually over the next decade."  Count what came after Dealey Plaza: the Vietnam War and protests, Woodstock and the sexual revolution, Watergate, postmodernism.
America pre-1963 feels united and purposeful, a Norman Rockwell family around the Thanksgiving table.  America post-1963 feels chaotic and reactionary, a Jackson Pollock drip painting.

Where am I going with all of this?? Ohhhh well I was a history major, you know. And I also was a U Guide at UVA. Giving both historic and admission tours is most definitely one of my fondest memories from college. So in honor of the 50th anniversary of JFK's assassination, I took Michael on the Kennedy walking tour in Georgetown this past weekend. We loved it. And I kept going all googly-eyed over the homes that John and Jackie met in, lived in, and mourned in. The best part is that the homes are all within a one-mile radius of our little apartment. Joy!

We went the unconventional (more like lazy) route and instead of walking to the houses chronologically in the order that the JFK lived in them, we walked geographically: from closest to farthest away from our apartment. Surprisingly, doing it this way turned out to be pretty fun because it was like putting together pieces of a puzzle as we had to remember where he lived first, second, etc. However, for the sake of this post, I've posted these pictures in chronological order. (If you want the easier walking route so that you aren't back-tracking all over Georgetown, I added that at the end.)

Here I am outside of 1528 31st Street NW. Kennedy lived here while serving his senate terms from 1946-1949. It was here that he began his presidential planning. 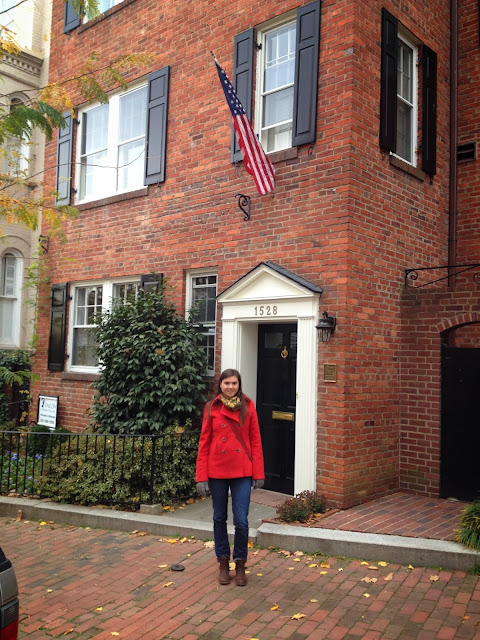 And here I am outside of this gorgeous house at 1400 34th Street NW. Kennedy shared this home from 1949-1951 with his sister, Eunice (what a name), before she got married. The back, upper deck of this Georgetown mansion is to die for! 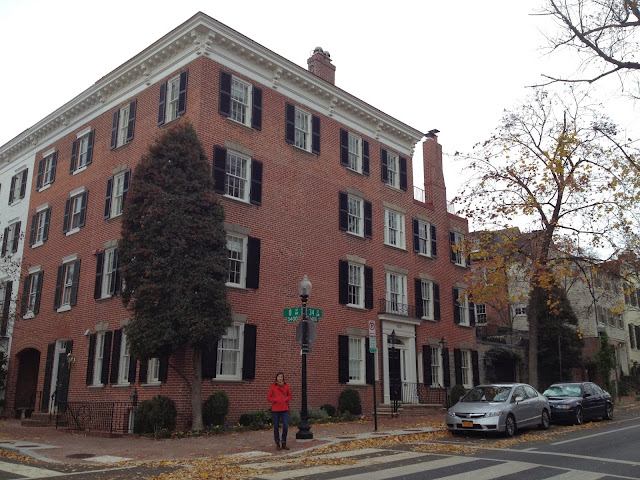 This little love shack at 3260 N Street NW is where Jack met Jackie at a dinner party. Kennedy rented it from 1951-1953 while running for Senate. 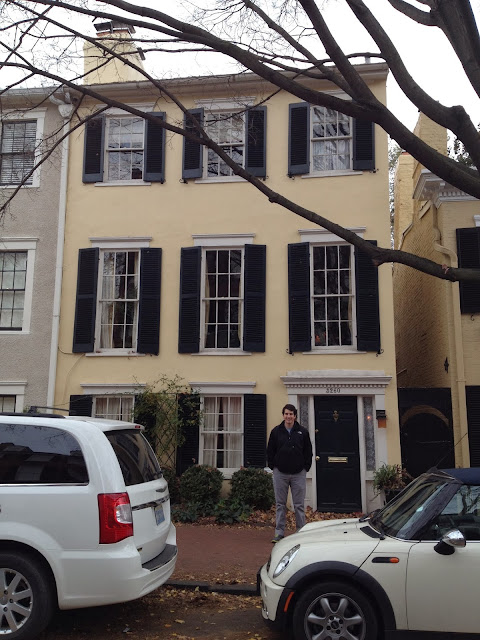 And here we have a little townhouse the Kennedy's rented and lived in right after they got married. This home, 3321 Dent Place NW, happens to be about 100 yards from where we live! Gosh, I love that. Jack and Jackie only lived here for five months from 1953-1954 before they had to go back to Massachusetts because of Jack's back issues. Our neighbors, sweet John and Eleanor, remember the Kennedy's living here. They have told us stories about how Eleanor's parents used to sit with the Kennedy's butler and maid and share neighborhood news. How cool is that. 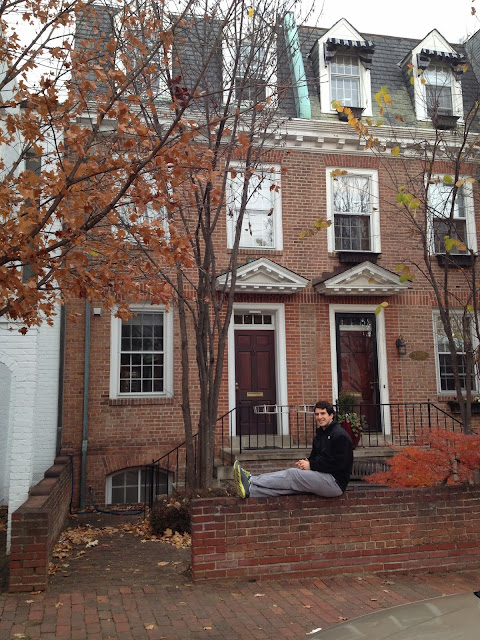 This little gray house at 2808 P Street NW is where Kennedy wrote Profiles in Courage and developed much of his presidential campaign in 1957. 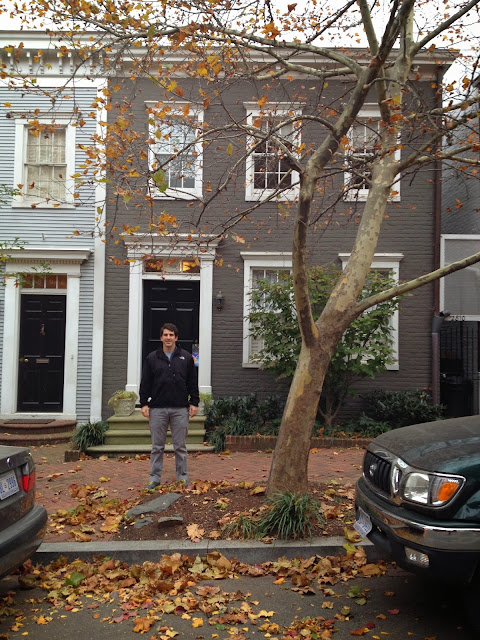 From there, they moved into my favorite house! This green-shuttered beauty is where the Kennedy clan lived from 1957-1961 as the presidential campaign progressed. After this, they moved to the White House. I think this house at 3307 N Street NW is so purdy. 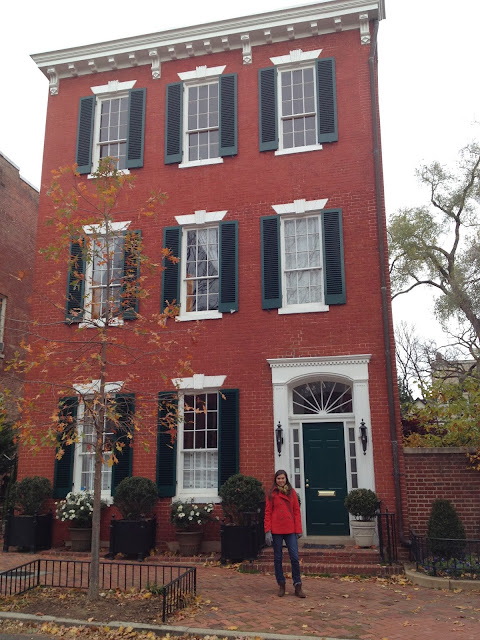 Finally, this home at 3038 N Street NW is where Jackie mourned her husband's death after his assassination. 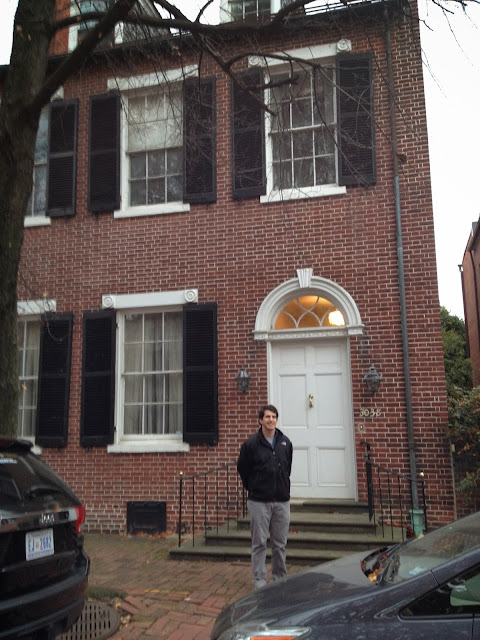 And lastly, for dinner, we went to Martin's Tavern, the iconic Georgetown pub serving presidents for the past 78 years. Martin's has it all -- history and great food and drink -- we had salmon and shepherd's pie and Blue Moons. Heavenly! As a congressman and then senator, Kennedy used to sit in Booth 1 and read the newspaper while enjoying Sunday brunch. And it was here, in Booth 3, that Jackie accepted his proposal on June 24, 1953. 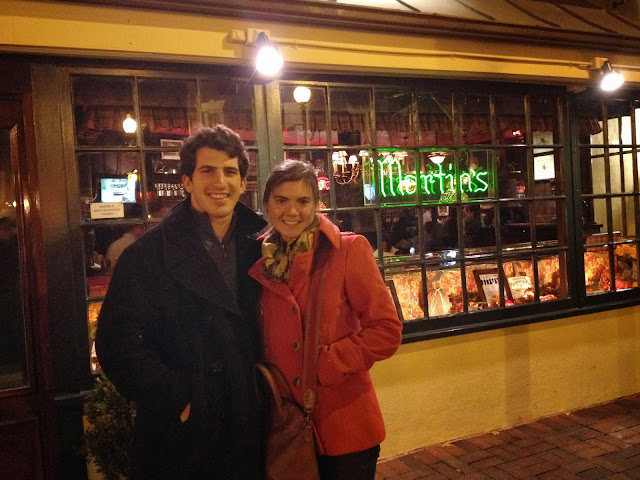 Love and happiness. Well, at least for a little while for Jack and Jackie.

And so concludes the tour! I do hope you enjoyed it. We sure did. It's pretty fun to live in a town where history abounds.

References:
Our trusty map we used. 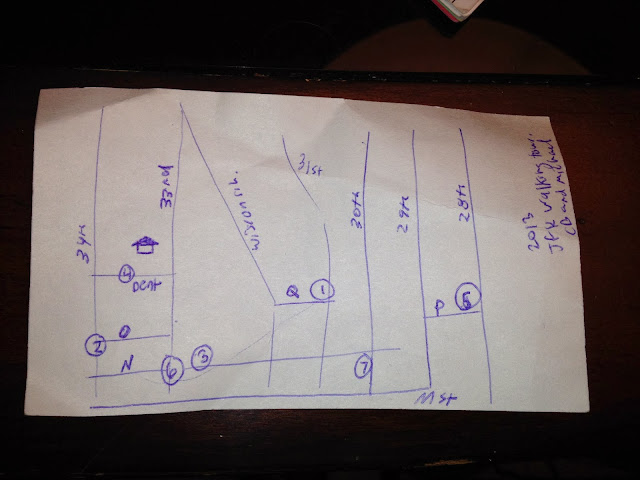 That little house is where we live -- hee hee. 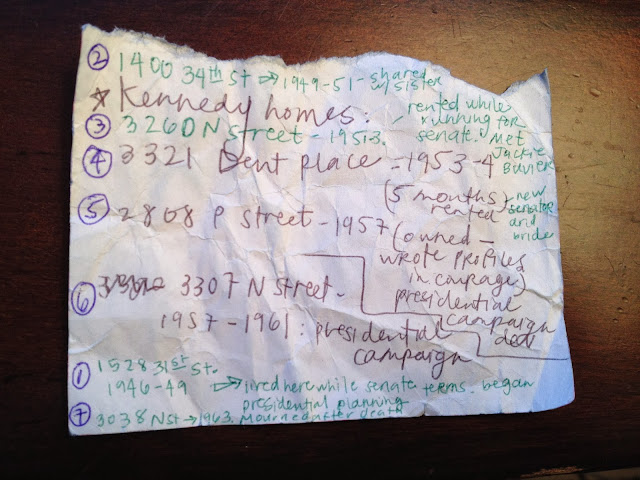 So high-tech, I know.

If you want to do the tour and walk it in a way so that you aren't zig-zagging all over the place, the numbers above correspond with the numbers on the map. You can pick your starting point based on what's easiest for you. Capiche??

Also, I would LOVE to give you a tour, if you'd ever like to do one. I'd include tons more tidbits than I've written here, and can also recommend what to eat at Martin's (or pretty much any local restaurant) and where to get some good deals while shopping. (Kidding -- good deals and Georgetown do NOT go hand-in-hand.) If interested, please email careybeth (dot) catalino (at) gmail (dot) com!

I didn't say this up front, but this post is going into the "Things I Love About Georgetown" bucket. So that would make this TILAG numero dos! (Here is #1 in case you missed it.)

We're off to New York City -- happiest of Thanksgivings to you!