We've had some funny run-ins with the cops at our little Georgetown bungalow.

I don't think I can write about some of them here, but you can just ask me and I'll tell you about how we have had (this is no lie) nine police officers, two detectives, and one undercover cop in our house within the 26 months that we have lived in DC.

I know, I know... this is SUCH a glowing report on why you should up and move to the District... Come on down!

However, of all these instances, I think my little escapade this morning takes the cake for being the weirdest call the Ward 2 police department has received in ..... well, I mean this is DC.... in a least a few days.

How does this happen, you ask?

It's a combination of a new schedule with Michael's crazy hosiptal shifts and the fact that I've been a bit of a zombie since arriving home from Turkey on Monday evening.

What day is it? What time is it? Why am I so tired? Who ammmmmm I?

Jk, I actually do know who I am. But give me 40 years and it could be a different story.

Anyhoo, the story is that yesterday afternoon, I had gone for a little stroll around the hood. Whenever this happens, I leave my keys in a secret hideaway spot so that I don't have to carry them with me. When I came home from my meandering, Michael (my sweet!) was already home, so I didn't grab my keys to unlock the door. And then, when we went to bed and locked up (at 9:00pm... that has GOT to be a record), I didn't notice that my keys were not hanging in their usual spot.

Then, since Michael gets up at 4:00am now (insane), he locks the door when he leaves for the hospital so that he knows I am safe and sound until I wake up 30 minutes three hours later. So when I got up at 5:30 (this was abnormal... but I did exercise this morning for a change.... woohoo!) I tried to go outside and....I couldn't! The deadbolt was locked -- and you need a key to open it.

Now, I work from home several days a week and the truth is that sometimes I don't go outside until 4:00 in the afternoon. So honestly, I shouldn't have been too worried about being locked in. But now! Oh but now. But now I knew that I actually couldn't leave even if I wanted to. This was utterly terrifying!

The floor started to spin, my lungs tightened, beads of sweat gathered on my forehead, and...I kid you not...THE WALLS STARTED TO CLOSE IN ON ME! It's about then that I pictured my lifeless body on the cold floor and I saw the headlines in tomorrow's paper: "Mystery: woman dies in a locked room."

I don't want my life to end as a riddle!

So naturally, I called Michael in desperate panic before I could faint into a helpless mess on the floor. And naturally, level-headed one that he is, he casually suggested that I call the police to come unlock the door for me.

He is so smart. I love him so.

When the police officer, God bless his soul, showed up a few minutes later, I spoke with him through the window and showed him my secret hideaway spot where the keys were. He just stood there and looked at me like I was crazy and said he didn't understand. "You want me to unlock the door? But you are inside!" No duh. I realize that.

A rush of cool air blew through the house when the door finally opened... freedom never felt so good. I was going to survive after all!

Clearly, I need more time to return to a state of normalcy. Once this happens, I will write about my time in Turkey -- such a wonderful trip! 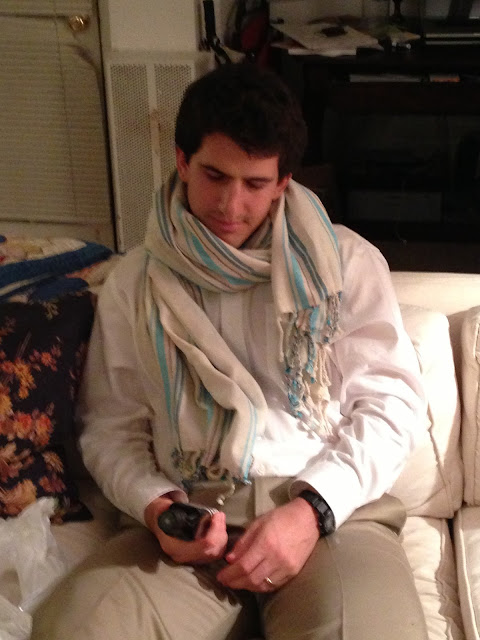 And I really love that he is brilliant. Where would I be without him??
Posted by Carey Beth at 11:57 AM