Michael and I had a little celebratory dinner recently because we found out that he knocked the Step 1 Boards out of the park!!

Michael is a funny one. He thought that he didn't do very well on the boards. In fact, he had me so convinced that he didn't do well that I was 100% ready to console and make the most of the score he received. Because after all, Heaven rules -- and we really would be a-ok even if his score was less than what we desired.

Fast forward to the text message I received at work on Wednesday from an ecstatic husband who told me his score. I sort of thought he was joking when he told me the number. And actually, I was the ecstatic one. Michael is so even-keeled. I'm commenced to bounce off the walls while he says "it's not me, it's the Lord" -- which I mean, yes, there's no arguing that, but I mean, Michael! Hello! He studied his brains out for six weeks. I kind of wanted him to take the tiniest portion of credit here, but of course, my attitude is wrong and his is right (per usual).

Anyway, we celebrated at Thai X-ing -- the tiny, eclectic, DC rowhouse on Florida Ave. that has been transformed into the home of the best Thai in DC (well, according to some. Others say Little Serow is the best, but it seems to me that Little Serow is a bit more out there in terms of menu items...pig ears?? Yikes.)

Thai X-ing (pronounced 'crossing') is BYOB and serves a set menu. The chef has full discretion to make whatever he wishes. I'm that girl who always asks the waiter 96 questions before she actually orders anything, so it was refreshing to not have to be finicky about my food. Once seated, we were immediately brought:

1) Cucumber Soup and
2) Some sort of shredded squash or cabbage salad... not sure. But it didn't matter! Because it was so good. The soup was hot and there was half a hulled and boiled cucumber in it. In the hollow of the cuke, there was some sort of meat. I have no idea what. Perhaps some sort of pork... but again, it doesn't matter! It was that good.

This was cleared away, and we were served, along with an endless supply of white rice:

Well, I can die happy. It was tremendous. The salmon curry was melt-in-your-mouth good. And this is no lie, because after two bites, your mouth really does melt. The curry was HOT. This is saying a lot coming from me. I have been known to stash red pepper flakes in my purse. True Story.

The pumpkin curry was less spicy and pretty much amazing. The chicken and eggplant definitely was more mild and helped sooth our tongues, and the shrimp and green scallions was refreshingly delicious. Each of these dishes is served on banana leaves... Michael asked if you could eat them. "No! No!" was our lovely (now worried) waitresses' reply.

While we were working on getting fat, we were then served:

7) Pad-see-ew. Will wonders never cease! My favorite noodle dish! I was genuinely full at this point, but how could I pass that up? Best pad-see-ew I've ever had = worth feeling a bit like a blimp. YOLO.

Then, thank goodness it was last because man it rocked, we had:

I can't. But so good. Ahhhhhhhhhhh.

I was so happy that I poured myself a 2nd glass of wine. Things get confusing when your eating Thai food of the Gods. 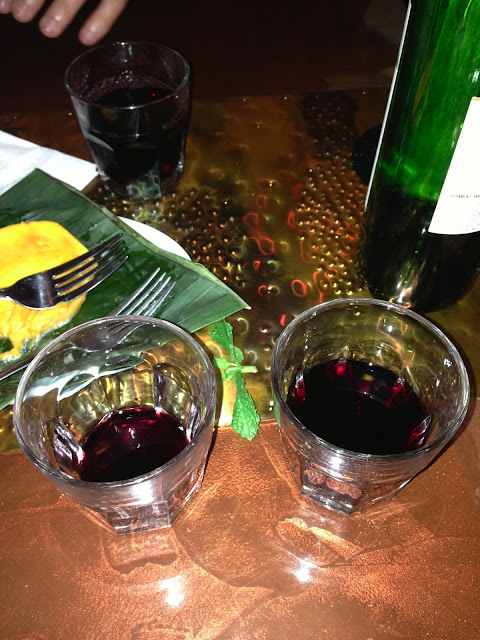 If you're in the area, you should go. It's worth the set price which is more than what you would pay in a normal Thai restaurant, but without a doubt, you get your money's worth. And you bring your own wine! 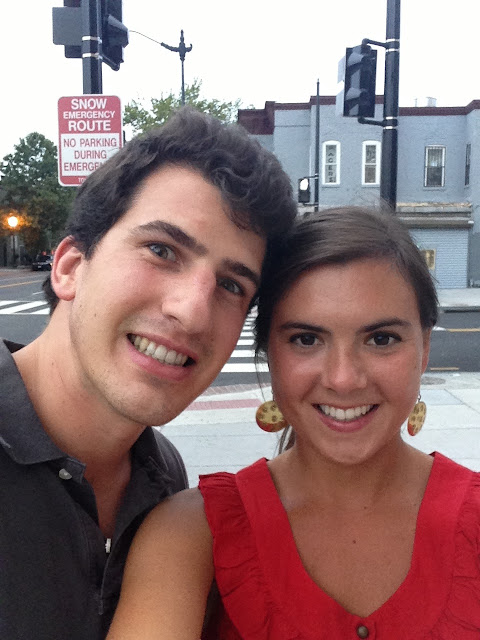 I'm really proud of Michael. We've gotten in a good habit of celebrating both the big things and the small, and his rocking the board exam is perhaps the biggest thing we've celebrated so far. God is good. All the time!