Written in the Stars

Well, we apparently have one now. Or maybe we have two. We've had two birthdays each and now two Valentine's Days in our short time of "til death do us part." Oh gaaaaaaaa I just mentioned death in a post on Valentine's Day. Who does that? Probably only me because we accidentally carbo-loaded tonight and I feel like death.

So apparently we now have a Valentine's Day tradition of making pizza. I know what you are thinking:

"Ummmm hellooo. Earth to CB, you married an Italian. Pizza is now like your middle name."

Yes I know! But the thing is, Michael has very little time anymore to devote to making pizza dough -- which is a rather laborious process.  Med school gets in the way. Baaaaaaaa. So it's a real labor of love that he made pizza for me tonight. And also, on Valentine's Day, I get to actually call the pizza shots in the kitchen. I get to make my fig jam/goat cheese/prosciutto pizza that has wowed the audiences for years. (Audience of one, Years = two.) The basic recipe in photo form is posted here from last year. And here is the grand prize winner from tonight: 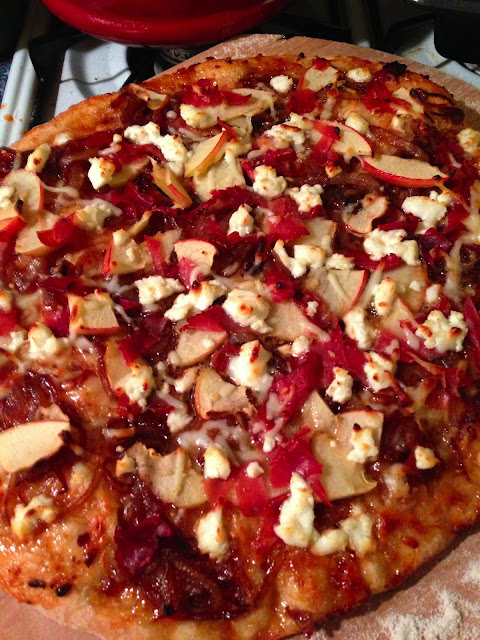 Honey/Fig jam base. Lordy. Some kind of good. 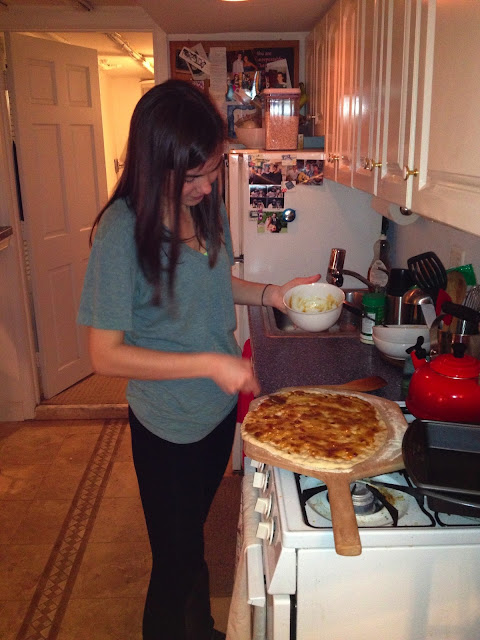 I wish I could tell you that we only made one pizza. But that would be a lie. 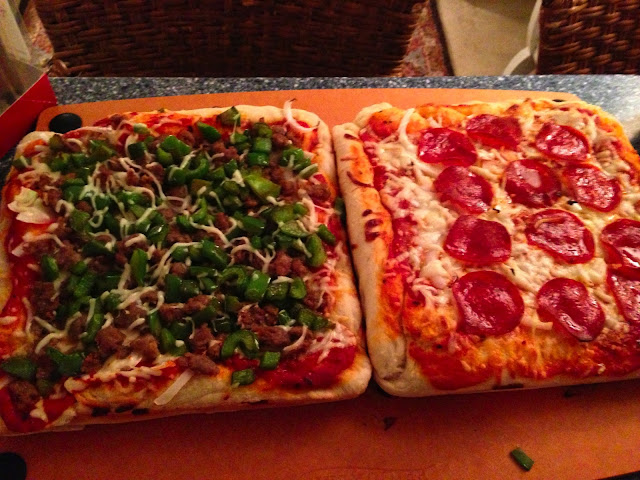 Pizza. The gift that keeps on giving. 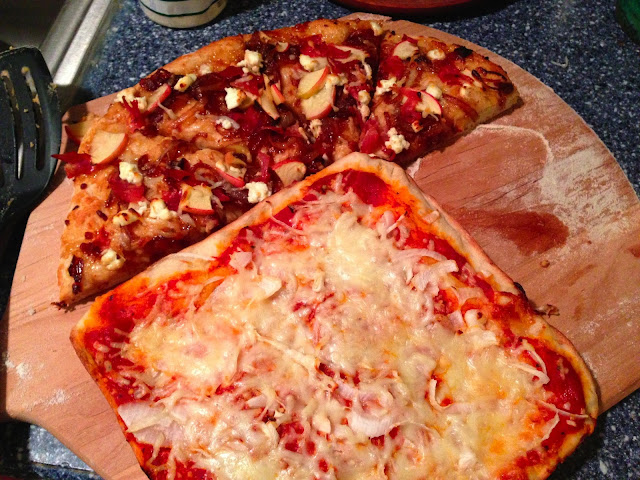 Now here is the big surprise. It really was written in the stars that Michael and I were meant to be together. Let me tell you a little story.

In 4th grade, I participated in "Invention Convention." It's exactly what it sounds like: every 4th grader invents something, we present our beautiful tri-fold project to an assortment of judges, and then the winners are announced over the loudspeaker at school the next day, followed by a school wide assembly where the winners get to talk about what they invented. There are different categories like business inventions, household inventions, things-you-can-wear inventions, sports inventions, etc. Well, lo and behold, it came time for the winners to be announced on the loudspeaker, and my name was called! Ok - truthfully, what really happened is that they didn't pronounce my name correctly so I had no idea I was a winner. It sounded like Casey Rhines, not Carey Ryan.... can't you read, people?!? So when I filed into the auditorium with my class, I had no idea that I was supposed to be backstage getting super nervous about speaking in front of the whole school about my winning invention. Therefore, right in the middle of the awards ceremony, some lady on stage asks my teacher if "Carey Ryan is here today??" to which I (no clue what was going on in my head) immediately jump out of my seat as if stuck by lightening and say, "me?? Carey Ryan? That's me!" And then I realized that I was standing up and acting royally uncool for a 4th grader and was so completely mortified that I could barely hold the microphone once I finally made it onstage to talk about my project (I had won the 'household goods' category of the competition). I couldn't even hide behind my trifold like all the other kids since I didn't have time to go get it -- I just had to talk cold turkey about my invention smack dab in the middle of the stage in a packed auditorium.

I'm surprised I lived to tell the story.

So where am I going with this?? This is where I'm going: 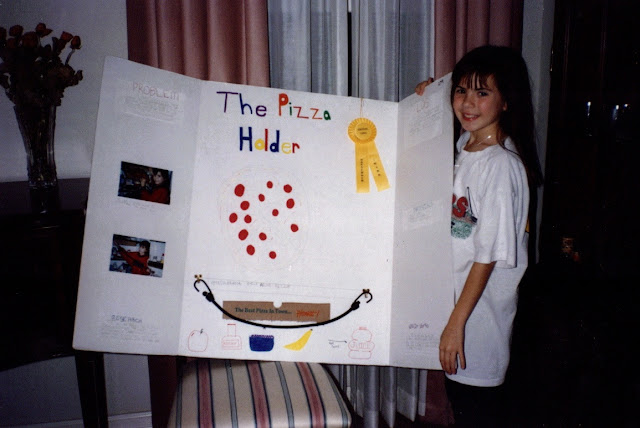 I invented a pizza holder.

I'll let you have a minute to marvel at my brilliance.

Heaven knows how I ended up winning that one. I mean, I literally strung a bungee cord (a bungee cord??) on a wire rack in the refrigerator to hold a pizza box. What the heck??! Definitely don't miss the picture on the lower left panel of my trifold as I am masterfully demonstrating how a bungee cord works. "You stretch it out real good, and then you hook it on the rack of your fridge, and YEA uhhh that's about it." WINNER! It must have been real slim pickings that year for the household goods category.

But the point (finally, I will get to it) is that I invented a PIZZA HOLDER! And 15 years later I would marry my Italian stallion who looks mighty cute covered in flour and throwing some pizza dough around the house. And making way, way, way too much pizza so you there is bound to be a ton of leftovers and they will have to be stored somehow.... and this is where I come in.

Somehow, even at 10 years old, all signs were steering me towards Michael. 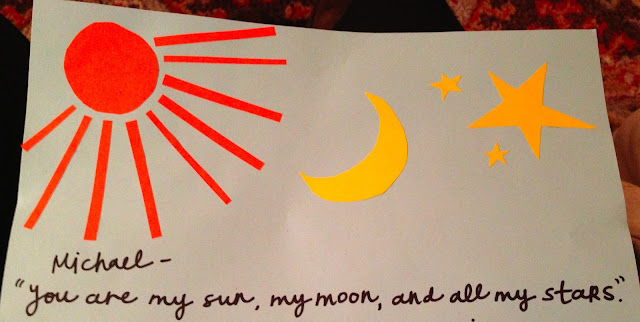 My sun, my moon, and all my stars. More to come on this homemade Valentine, but 10 points to anyone who knows where that quote comes from.

Happy Valentine's Day to all and to all a good night! May you always have someone to hold your pizza. 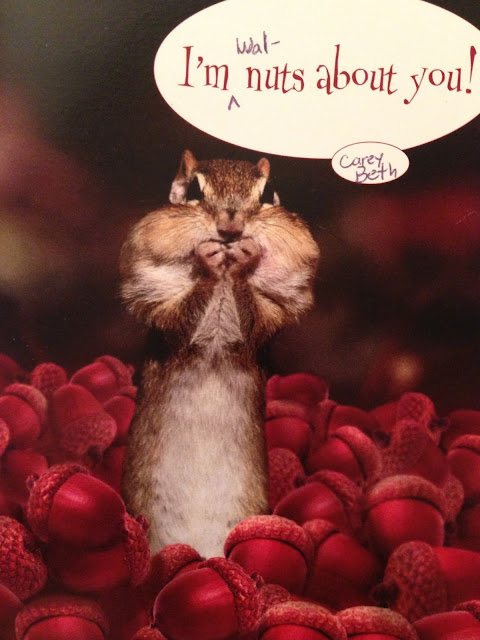