Our last hours of 2012 were spent partying our brains out!

Our last hours of 2012 were spent doing quite possibly my favorite thing ever: dinner and a movie. 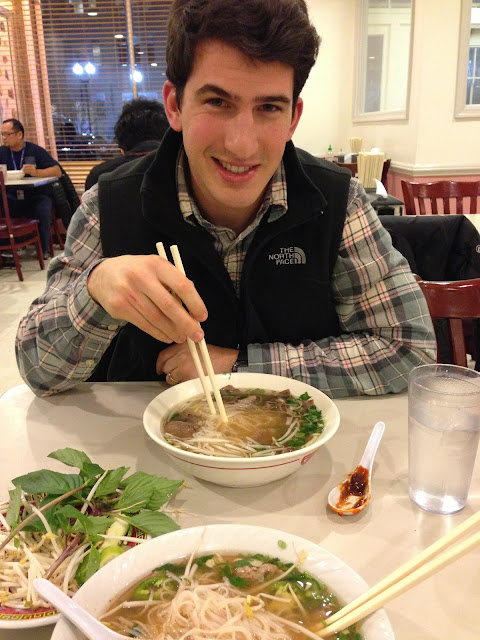 Pho 75 with my main squeeze. If you live in DC or Arlington or anywhere thereabouts, this is your place for pho.

I never tell a lie.

Pho was followed by Les Miserables at the Gtown cinemas.

Vietnamese and then the French Revolution in song??!?

You heard it first here, folks.


And after a lovely walk home, we hit the hay. I won't tell you what time. But I will tell you that it wasn't before I read chapter one of Harry Potter and the Half-Blood Prince. It seems I just can't get away from English writers these days. Because I just read a good one. No, a GREAT one: Emily Bronte's Wuthering Heights. Oh so much could be said about that book, but most has already been said (I googled it.) I also want to write a lot about Les Miserables but so much has already been written about the screen adaptation that my analysis is most likely unwanted and you wouldn't agree with me anyway. Why is that? Because everything I have read about it is different than the next thing I read about it, and people generally have different opinions about who sang what song well or not well or why that actor was so terrible or simply the best. So. Just go and see it! If you have seen the play and know the music, I really do think it will be a treat for you. If you haven't (Michael hadn't) then it may seem a bit tedious. But still go see it. There is so much to talk about even if musicals aren't really your thang.

So much could be said. I wish I was in high school English class with Mr. Lindsay doing an inner-outer circle. Those were the days.

So that was the end of 2012. I'm a lover of new years resolutions and although I'm still sorting mine out, I love this line from Wuthering Heights:

This is the truth. Get to work, sleepyhead. It's a new year!