My man turned 25 on Sunday! We had a great weekend of mojitos, tennis, a friend's wedding, waffles, lounging poolside, ice cream cake, and Michael's annual birthday dinner of chicken marsala and creamy parmesan risotto. I say "annual," but really this is only the 2nd year I've made him this dinner. I barely even knew Michael on June 24th in 2010, we were one week away from being married on June 24th in 2011, and now we have nearly one year of marriage under our belts in 2012. Time flies when you're having fun! 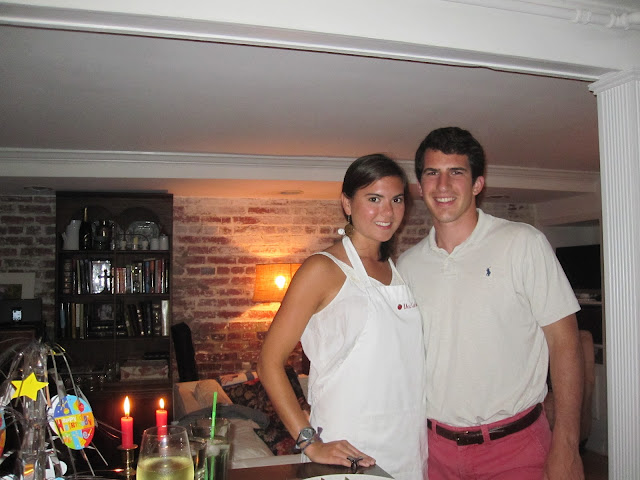 Having had such success last year at wowing Michael to the moon and back with my kitchen skills (he raved about the chicken marsala and risotto for the whole weekend and then seriously for about 2 months after that), I thought "ain't no thing, chicken wing" when planning for this year's birthday meal. It was in the bag, so to speak.

Well. Pride goeth before the fall.

I have no idea what happened, but I couldn't do it. I simply couldn't do it this year. Trying to figure out how to continuously stir the risotto while adding white wine and then 1/2 cup after 1/2 cup of chicken broth for 30 minutes WHILE dredging pounded chicken breasts in a flour mixture and sautéing them for 5 minutes on each side and adding prosciutto and mushrooms and marsala wine and chicken broth to the pan WHILE making sure the asparagus doesn't burn in the oven WHILE also making sure we have the most fitting music playing on Pandora (T. Swift station does the trick) WHILE keeping a cheerful countenance on my face and trying not to die of heat from the oven heating up our little kitchen, basically made me blow a fuse and frazzle up and deflate into a soggy mound of wife.

On my husband's birthday, mind you.

It feels terrible to be a soggy mound of wife. I thought I had planned for everything, but I certainly hadn't anticipated the mascara running down my face in little streams of salty ink.

But this is about where my loving hubby stepped in. Literally to throw me over his shoulder and lift me up and tell me that it is all ok. That he doesn't care even one bit that I'm delusional and having a strangely hard time making honestly not that hard of a meal. That he would love me even if I hadn't planned anything at all for him on his birthday. That his love is not IN ANY WAY dependent on circumstances and what I can do for him. That he loves me just because he loves me. That we are going to cook this meal together and it doesn't matter that I did it all by myself last year because this year, we are cooking it together. That I better not protest (Lord knows I tried) because he's already putting on his apron and rolling up his sleeves.

And if that is not a shining example of the way Christ loves us, then fly me to the moon and call me crazy.

William Blake said that "we are here to learn to endure the beams of love." There is nothing like being a soggy mound of wife (or friend, or sister, or daughter...) and having love aimed directly at you in your moment of total humility. Deep, piercing, nowhere to run, you-are-a-mess-and-it-doesn't-matter love.

Being married to Michael for almost a year has brought countless moments like this one. Where I am sure that he will think "wow, I've married psycho woman numero uno," but instead he astounds me, like flattens me out astounds me, with his love for me.

His birthday dinner turned out to be amazing. Maybe even better than last year. 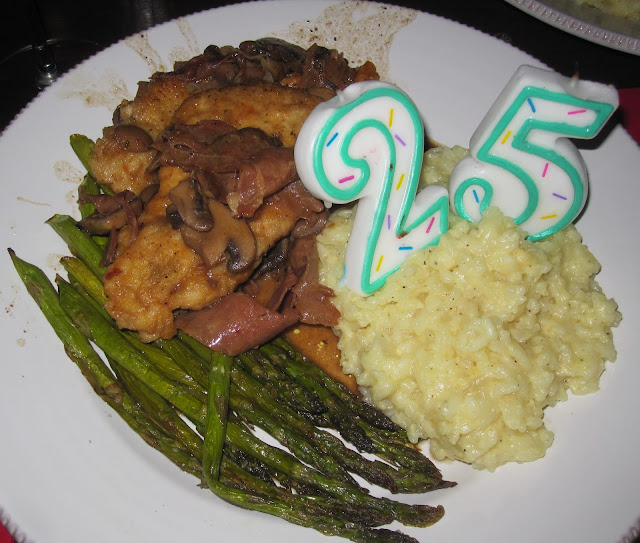 I've said it before and I'll say it again -- Will wonders never cease!