My first job out of college was in the test kitchens of Southern Living magazine in Birmingham, Alabama. I did a lot of this and that: cooked, baked, proof-read recipes, went to the grocery store (sometimes three times a day,) went to the seafood market, did food design during photo shoots (things like squirting the sides of the glass so that drinks appeared chilled, or placing a cherry to perfectly fall out of a slice of pie,) and taste-tested a LOT of recipes. I remember trying so hard to create the perfect peach pie that we taste-tested two pies a day for four days straight. Oh hello, sugar coma, nice to see you. This is no lie: while driving out of the parking lot on the last day of my internship, I popped a button off my jeans.  It doesn't get any clearer than that: I was not meant to work in the food industry. No-sir-ee, I learned that it is better for me to partake in, but not to create, food (for a profession.)

So what do I do? I run off and marry the first Italian I meet and we do nothing but make pizza, stuffed bread, pasta, ravioli.... PERFECT for my soul, but not for my waistline.

The other thing I did at Southern Living was answer phone calls from readers calling in with questions about a recipe, or advice on how to baste a turkey, or how long do eggs need to boil, or why did this sauce turn out so runny, or (one of my favorites) "I left the green beans on the counter all night.... do you think I can still eat them?" Good grief, throw them out!

What made me think about all of this tonight is three things:

1) I tried to salvage a thawed chicken breast that had been sitting in the fridge for maaaaybe 5 days. It didn't smell quite right, but Michael and I both thought that we could just "fry" off the smell. Oh my gosh. Plug your nose. Don't even try it. Throw it away! The whole house (which is really just one room) smelled like burnt yeast and curdled milk. Maybe I should call Southern Living next time and ask their opinion about when chicken goes bad.

2) I am reading Julia Child's My Life in France and absolutely love it because she writes the way she speaks, which I have been told I do too. She uses words like "Woe!" and "What fun!"and "boo!"and "hooray!" and "I would be delighted too!" What's not to love. 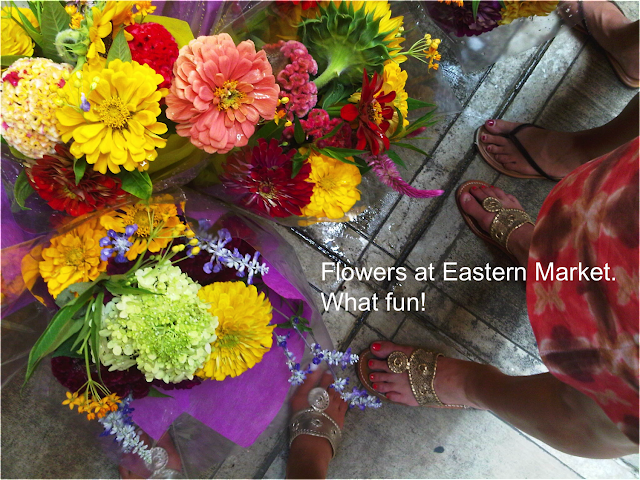 3) Southern Living + My Life in France = the number one thing I learned while at Southern Living is the French term mise en place.  It means to have "everything in place" before you begin cooking. If the recipe calls for adding chopped vegetables after the butter melts, well you sure as heck better have those vegetables all ready to go. If you need to reserve some pasta water to add at the end of a recipe, have a bowl under your strainer to catch the water! Many a kitchen tragedy has been avoided because of mise en place.

So, with that lesson under well under my belt, I recently learned something new from Mrs. Child: never apologize for your cooking. She writes, "I don't believe in twisting yourself into knots of excuses and explanations over the food you make. When one's hostess starts in with self-deprecations such as, "Oh, I don't know how to cook..." or "Poor little me..." or "This may taste awful..." it is so dreadful to have to reassure her that everything is delicious and fine, whether it is or not. Besides, such admissions only draw attention to one's shortcomings (or self-perceived shortcomings), and make the other person think, "Yes, you're right, this really is an awful meal!" Maybe the cat has fallen into the stew, or the lettuce has frozen, or the cake has collapsed -- eh bien, tant pis! Usually one's cooking is better than one thinks it is."

We all do it. Lesson learned. No apologies. Cook on!