Good Reads = Of my love be sure 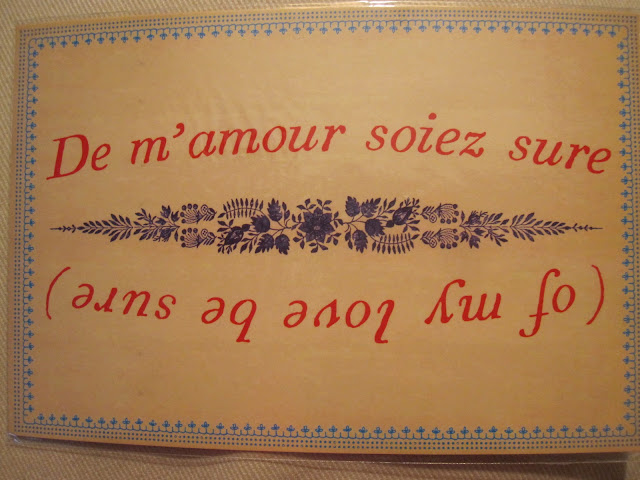 I really want to make a point to remember our time in DC and Michael being in med school, both the big things and the little things. Something little is that before turning off the lights at night, I have been reading Harry Potter in bed while Michael is beside me reading Gray's Anatomy. This scene has more or less been a constant for us the last couple of months. I laughed when I realized what was happening and begged Michael to get out of bed to get the camera a few days ago. We did take a picture, but instead of posting it here, I put up this wonderful postcard that I found at a consignment store the other day. Sigh. I wish I spoke French.

All fall and winter, I have been re-reading my beloved Harry Potter, but also interspersing it with other reads along the way. The best interruption, by far, has been Unbroken by Laura Hillenbrand. My dear friend Molly gave it to me for my birthday in December. I read it along with another book (that was so disappointing that I won't even bother to mention it) while at the beach over Christmas. Unbroken is the unbelievable, true story of Louie Zamperini's survival after his plane crashed in the Pacific during WWII. The story is uplifting, moving, heartbreaking, and redemptive. Read it!

Michael and I walked to Kramer Books a few weekends ago and I wrote down a couple of novels I'd like to read once I get through the growing pile I already have at home. They are:


Every Man Dies Alone, based on a true events, is the story of a couple in Nazi Berlin who resist Hitler in their own small way. New York: The Novel is a grand and sweeping history of New York City. Once a Runner is apparently the greatest novel ever written about distant running. I don't claim to be a distant runner, but I can run when I want to. I read Born to Run last year and LOVED it. It changed how I think about running, motivated me to not walk even when sorely tempted, and I'm still thinking about running barefoot every now and then (on a track, not down the street. That would be stupid... yet people do that too.)

I am half-amused and half-ashamed to admit it, and I know I am wayyyy behind the times, but I recently acquired the Hunger Games series. I read the first book on Sunday. These weird, implausible, sucks-you-in-and-your-hooked romances are so darn good.  Just like Twilight, The Hunger Games portrays two lovable boys who are after the heart of one girl. But unlike Twilight, this series actually has a plot.  I just started the second book.  I'm on team Peeta, all the way. Can't wait for the movie!