There's no use in hiding it so I won't.

I get star struck.

All wide eyed and excited and oooo play it cool, play it cool! Yea but no, more like play it go crazy. I go crazy anytime I see someone remotely, even a teentsy bit famous, well-known, or even just recognizable. I can't really figure out why. I love who I am (not that there aren't some parts of my character that will always need major development) and am happy being more or less pedestrian, so it isn't like an envy thing. It is just plain syndrome of the star struck.

When How Do You Know (not worth seeing) was being filmed in DC in 2009, I literally jetted out of work and power-walked ran in heels to Dupont Circle to try to spot a glimpse of Jack Nicholson coming out of his trailer. No luck. Darn. Dejected. The only thing I came home with was blisters.

It goes without saying that DC is a little bit different with its famous folk. There certainly are movie stars and Beyonce types walking around, but it's mostly on the Hill where they go to lobby or support a bill being passed. But the other category of celebritydom that people actually notice here in DC (probably a lot of people elsewhere don't know what 99% of them look like) is the politicians. My personal favorite is seeing politicians go shopping at the grocery store. One time in the Foggy Bottom Trader Joes, I saw Senator Joe Lieberman buying broccoli. Just a few weeks ago at the Georgetown Safeway, Janet Napolitano was eyeing the hummus. I wouldn't have noticed except that Michael and I saw her security people combing the store, ear pieces and all. Michael thought it was the coolest thing too...it's not just me!

Just this morning, I was jogging up Mass Ave. past the VP's house, when a motorcade of those motorcycles with the little sidecar attached started driving by. I was in rough shape at the moment because that particular part of the run is on a pretty decent incline, but as soon as I saw the motorcade start to pass by, I straightened up and ran like it ain't no thing. (Running these days is few and far between so the fact that I was even moving my body was good enough for me.) A few minutes later, I saw Joe Biden go by as he drank coffee in the backseat of his limousine.

Also, true fact, which honestly isn't a big deal because if you live in DC it's bound to happen at least once, but I've run into every member of the first family. Seeing Obama himself was a bit indirect: I used to work on Pennsylvania Ave. a block from the White House, so his motorcade drivebys were an every day occurrence.

But the very best was when my beloved friends Avery and Allie came in town for the 4th of July two summers ago. We had just dropped Allie off at the Bolt Bus to go back to NYC, and we were meandering around Georgetown until Avery had to fly out herself. Naturally, where do we go? Thomas Sweets, the iconic, overpriced-but-worth-it fudgery/ice-cream shop of Northwest DC. I remember very clearly what we were discussing while eating our ice-cream: boys (Michael had just entered my life), and art. There was a huge man sitting at the table next to us, which in retrospect was odd, but we paid him little attention as we continued talking. Five minutes later, four Escalades parked right outside and out popped... Michelle, her mom, and the wee Obama daughters.

No way. So cool. Play it cool, play it cool! Avery and I thought it was the coolest thing. And I did covertly obviously take some pictures. We continued eating our ice cream while Michelle sat at the table next to us. I sought the advice of three friends on whether or not I should actually post the pictures. One said go for it but two said not to. Sigh.

What I think is the funniest thing is that it turns out that the huge guy who had been sitting at the table beside us was actually with the Secret Service. I can only imagine that he said something like "Coast is clear, Mitch. Coast is waaaaaay clear" as he overheard Avery and I talking about love and the MoMA. 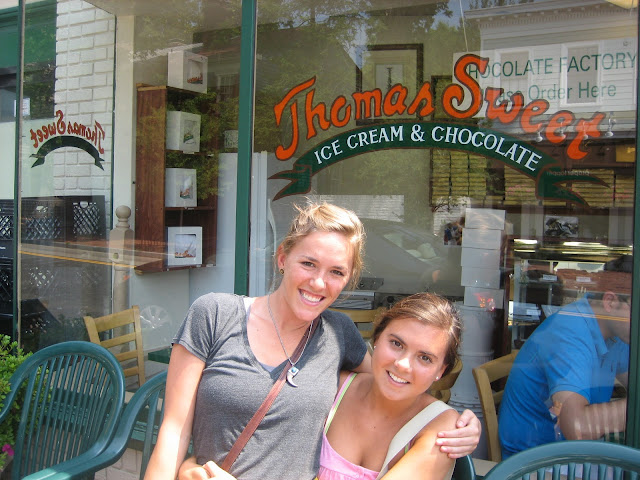 So, I get star struck. I love seeing famous people. In DC, it can sometimes be rather dull because the famous people are politicians, but I was still glad to eat ice-cream with the first lady. DC friends, puhleeeease always tell me if you see a celeb walking about town, especially you, Abianne. Abianne has a knack for it, aided by the fact that she works at the Georgetown LuLu Lemon. I told my brother that if he makes it big and goes to the Oscars, I better be his date. It's my thank you for all those years of rehearsing lines with him: To be of not to be that is the question...whether tis nobler in the mind to suffer the slings and arrows of outrageous fortune, or to take arms against a sea of troubles... 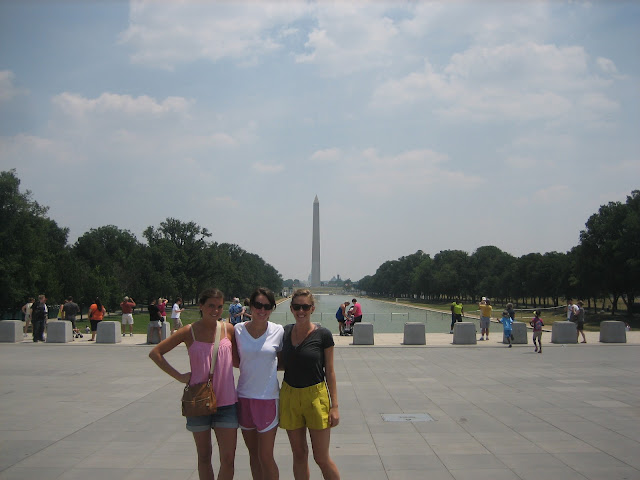