I am re-reading books that I read several years ago and am as completely taken with them as I was the first time I read them.  This can only mean one of two things: either I just loved the stories so much that I want to immerse myself in them once more, or - and this is more likely -  I'm turning into an old woman and can't remember the plot so have to therefore re-read the whole book.

I just did this with The Guernsey Literary and Potato Peel Pie Society. I read it maybe two summers ago and was so intrigued by the story. It not only sheds light on the German occupation of the Channel Islands during World War II, but it makes you fall in love with each character as you come to know his or her voice. The whole story is told via a series of written letters, all fictional, but all accurate in how they depict the way the Islanders lived and supported each other during the occupation. And, this book is so funny. Laugh out loud funny. Always a plus. 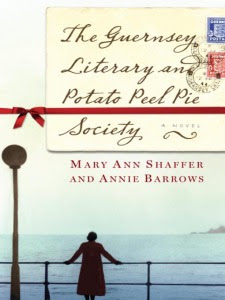 Here are some of my favorite passages:

"Doodlebug... That was the name coined by the ministry of Information; it was meant to sound less terrifying than "Hitlers' V-1 Rockets" or "pilotless bombs." We were all used to bombing raids at night and the sights that followed, but these were unlike any bombs we had seen before. They came in the daytime, and they came so fast there was no time for an air-raid siren or to take cover. You could see them; they looked like slim, black, slanted pencils and made a dull, spastic sound above you - like a motor-car running out of petrol. As long as you could hear them coughing and putt-putting, you were safe. You could think "Thank God, it's going past me." But when their noise stopped, it meant there was only thirty seconds before it plummeted. So you listened for them. Listened hard for the sound of their motors cutting out."

"Your questions regarding that gentleman are very delicate, very subtle, very much like being smacked in the head with a mallet. Am I in love with him? What kind of question is that? It's a tuba among the flutes, and I expect better of you. The first rule of snooping is to come at it sideways - when you began writing me dizzy letters about Alexander, I didn't ask if you were in love with him, I asked what his favorite animal was. And your answer told me everything I needed to know about him -  how many men would admit that they loved ducks?"

"Have you ever noticed that when your mind is awakened or drawn to someone new, that person's name suddenly pops up everywhere you go? My friend Sophie calls it coincidence, and Mr. Simpless, my parson friend, calls it Grace. He thinks that if one cares deeply about someone or something new one throws a kind of energy out into the world, and 'fruitfulness' is drawn in."

Ps. Tell me if you have read any amazing books recently! I love recommendations.