There's been a lot of firsts around here lately.... 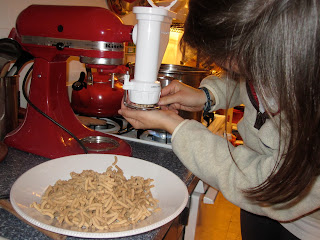 Like the first time we have ever used our KitchenAid to make pasta. Let me tell you what, it was divine. And we went healthy. I know what you're thinking: "How is pasta healthy??" Oh hush now. It was whole wheat. Nothing in it but flour and egg. Claire and Billy Jones and the Clifts need a major shout out right about now: Thank you for our wonderful, red KitchenAid. It brings with it much joy and just knowing that it's from Claire, Billy, and fam makes it that much sweeter. 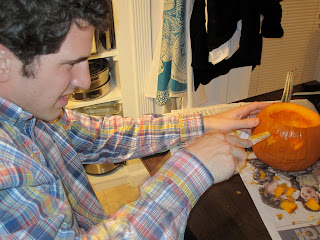 ....Like the first time Michael and I have celebrated Halloween and carved a pumpkin together! Michael carved a pumpkin! Look at that intensity. We weren't sure if we should put our little jack-o-lantern outside for fear of attracting costumed kiddies to our door because...... we forgot to buy Halloween candy. I know, I know -- you're wondering if we're even American. We just didn't get to it. After much consternation, we resolved to pass out granola bars (Nature Valley of course) should we hear a knock at our door. Luckily, our upstairs neighbors dutifully manned their candy basket. No little munchkins actually braved our doorway only to give us a look of dejection when we handed them granola bars instead of Reese's Pieces. We'll be better prepared next year. After all, who wants to be the crazy health-nuts who pass out granola bars on Halloween?? 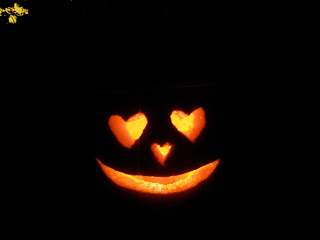 Our pumpkin had hearts. You know you've married the right man when it was his idea to do hearts, not mine. 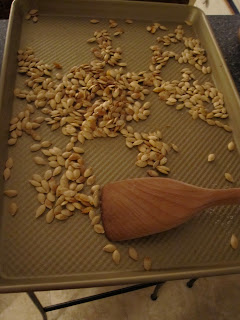 Of course with the first pumpkin carving comes the first pumpkin seeds! I wasn't actually quite sure how to roast pumpkin seeds, but I knew who would. None another than my own sweet mama, Barbie Ryan. I quickly called her up and followed her instructions which ended up making the best pumpkin seeds I've ever had! No lie. So good that I had to write it down so I wouldn't forget it. I'll share the recipe: 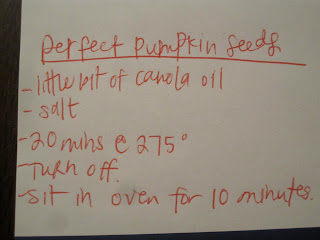 ....Like the first time I have EVER IN MY LIFE successfully made an omelette!!!! 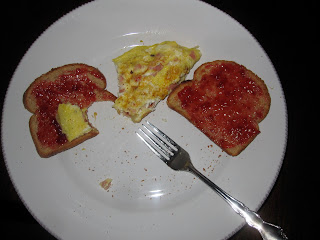 It was so good that I was already half-way done before I realized that this was too good to be true and I just had to take a picture. My success story begins with my hubby. Michael has been making omelettes since he could practically walk, so for him, flipping semi-cooked eggs, onions, ham, and cheese in a skillet and having it actually land in the same spot is like second nature. For yours truly here, I have had some catastrophic results in my attempts. However, I am a student of observation. After 4 months of marriage and watching Michael's technique (gently lifting the sides of the omelette with a spatula so that the non-congealed part of the egg could run to the edges, then shaking the pan back and forth to make sure no part of the omelette was still stuck to the skillet, then flipping the omelette upside down with a mere flick of his wrists and catching it back in the skillet, then adding cheese on top right before folding the omelette onto a plate,) I decided to try it out. Lo and behold, it worked!  Will wonders never cease. Whoever said you can't teach an old dog new tricks was wrong.