Deeper Magic from Before the Dawn of Time 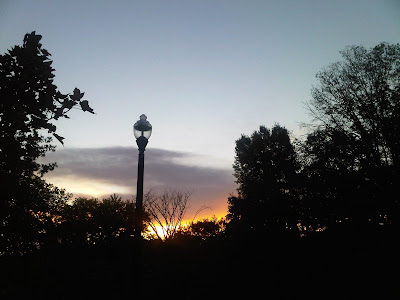 10 points to anyone who knows the reference of this post's title...
After returning home from an early morning run, I almost always stroll around the outside of my apartment and do such things as stretching, killing time, making myself late to work, saying hello to the dog-walkers, and definitely being so thankful that my workout for the day is over. Of late, the sunrises have been AMAZING, and today was no exception. I ran inside to get my dinky camera phone and attempted to capture the moment.....which was a failure on all accounts because it's seriously impossible to get a noteworthy picture on that thing. But, I actually love this picture. Why? Because of what it made me think of. Which is? The title of this post: Deeper Magic from Before the Dawn of Time.
Spoiler alert! Here's where it's from: CS Lewis' beloved The Lion, the Witch and the Wardrobe. While yes, I did read the Chronicles of Narnia when I was younger, I cannot claim credit for recently harping upon this actual line from the LW&W. I read it last week in our current Bible study book, Better than My Dreams by Paula Rinehart. And look at that! Today I saw this lamp post. Lamp posts will forever remind me of Narnia, where the White Witch ruled. Her evil spell is called "deep magic from the dawn of time," and causes it to always be winter but never Christmas in Narnia. When Aslan enters the scene, his chapter is entitled "Deeper Magic from Before the Dawn of Time." And when he appears, the snow begins to melt.
Aslan's magic is the deeper magic. Christ's magic is the deeper magic. It is only through him and for him that the sun continues to rise each day as "he wakens me morning by morning" out of his goodness (Isaiah 50:4).
Upon meeting Aslan for the first time, Lucy asks if he is safe. The reply? "He's not safe, but he's good."
He is so good.
"For you who revere my name, the sun of righteousness will rise with healing in its wings." Malachi 4:2
Posted by Carey Beth at 6:19 PM No comments:

I thought today was mid-September. Lo and behold, it's actually September 27th, which I think qualifies as late-September. Which is totally and undeniably the FALL. As in autumn... not the fall of mankind or anything like that.
WHERE DID THE SUMMER GO. Let's talk highlights: Duke winning the lacrosse national championship (a great way to kick off summer, in my humble opinion,) weddings, Michigan with the fam, lazy evenings, early morning runs because it was too flaming hot to run after work, amazing sunsets, berry picking (therefore, berry pies,) sun tans, ranches, fireworks, tubing the Potomac, flowers at Eastern Market, stargazing..... and last but not least, baseball. I did finally make it to a game in the end. Actually it was on the first day of autumn, but who's counting. 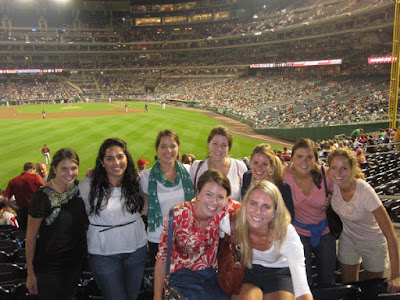 Really, Summer 2010 has undeniably come and gone, but it was one for the books. I remember being so ready for it. I think you would have to be insane to not be craving summer after the winter and spring that DC had... ummm... I try to avoid talking about it, but snow? Ya, it rings somewhat of a bell. All I wanted was to have sunkissed days outside -- the feeling of being chilly at night because you got a touch too much sun during the day so all the heat rises to your skin -- that is the feeling of summer to me. But surprisingly enough, fall has come. And last week when we were in the midst of an Indian Summer and you couldn't go outside unless you wanted 20 mosquito bites on each ankle, I definitely found myself wanting fall. Fall! It's here, and the rainy day today was a clear indication of it. (I loved it -- especially because I get to work from home on Mondays and was exceptionally happy to curl up in bed with my coffee and computer.)
I think the Lord knows we are people who get bored. I wish it wasn't entirely true. There are unfathomable joys to every single day we are alive, and honestly if it was summer all year round, that'd be ok. But the thing is, I wouldn't enjoy the summer if it wasn't for the spring. And I wouldn't long for fall if it wasn't for the summer. Longing for winter? Maybe for a second. Maybe just to have snow on Christmas day, but that is it. But the Lord knows he needs to change things up on us every once and awhile. We'd probably go crazy if it was as hot as it is in the summer all year long. And I would be entirely too anti-social if it was forever summer because it takes every ounce of my concentration to not be glued to my pool-side chair all day long each Saturday between the months of May and August. Actually, I remember Carrie Butler saying in April after leaving a Mumford and Sons concert that she just wants to "walk outside and swwwweat." She said it with such passion in her voice. A true Florida girl. So she might be an exception to always wanting summer, but in general, fall is wonderful, and truly something to be desired. Thanks be to God that he knows us well enough to give it to us...
Goodbye, hot summer -- 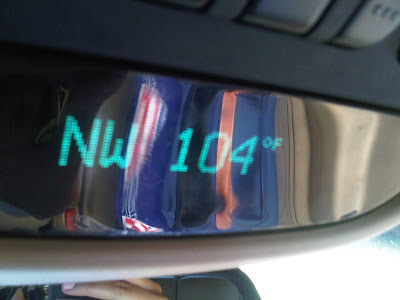 Eww. Hot. I think I took this pic in mid-July, right before leaving
town for Sarah and Steve's wedding.
BUT THE FALL: Glorious fall! Fall equals amazing sunrises, bountiful blessings (hoos prematurely excited for Thanksgiving?) pumpkin beer, pumpkin lattes, pumpkin muffins, sweaters, socks on the feet, Halloween candy, football games, snuggling in blankets, watching movies, popcorn on the stove, and hiking in the mountains as the leaves change.
I know in about 2 months I'll be saying that spring can't come soon enough, but for now, fall is where I am happy to be. Oh fall, you are my pumpkin muffin.
And in conclusion, here's a nice reminder about life from St. Michael's on the Eastern Shore: 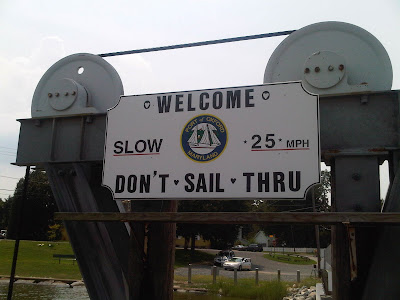