Tonight I Can Write

Almost two months ago, several of my beloved roommates and I moved into a rockin' new apartment in Courthouse. We love out new digs, and it's situated directly across the road from Fort Myer, which is right next to one of the coolest places ever...

I have discovered Arlington Cemetery.

Please go here if you never have. Go around 5pm in the afternoon when the light is right, and it’s hot and breezy, but not too bad. I have jogged past the cemetery countless times on my way to visit Old Abe Lincoln across Memorial Bridge (this little jaunt has become a fixture in my week - running over the river, planes landing at Reagan flying in overhead, cars whizzing by in their rapid exodus from the city, their drivers wishing their work day ended at 4pm as well,) but I had never actually gone into the cemetery until a good friend and I took a talk-walk a few weeks ago. We ended up wandering all throughout it.

We climbed the hill and lo and behold, Robert E. Lee’s house is sitting on top. I had no idea. Standing there, you can look out onto all of DC and see the precise layout of the city, just as Pierre Charles L'Enfant designed it. JFK’s tomb is right there as well, and Jackie Onassis with him. The tomb of the unknown soldier, countless gravestones, Lincoln’s wife, thousands of soldiers’ lives marked in memorial.

We happened to be walking around right at the peak of spring. And when I say this, I only mean one thing: TULIPS. The beauty of the departed mirrored in tulips. Here -- 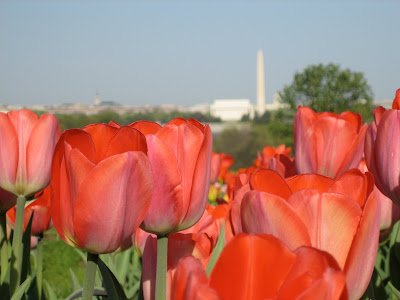 Surrounded by these gorgeous flowers is a huge black bell tower adjacent to the cemetery, and the tower stands right next to the Iwo Jima Memorial.

Every night at exactly 11:00pm, I hear taps. I always thought that the horns were coming from that bell tower next to the cemetery, but turns out, they are coming from even closer, from just right across the street at Fort Myer.


Taps tells the soldiers that another day is done. (It doesn’t stand for Totally and Perfectly Sleeping, as many a camp counselor may have once told you.) It signifies the close of another day, it commends a job well done, it provides solace in its consistency to those who wait to hear it each night. Everytime I hear taps, I'm reminded of a line from Shakespeare’s Henry V: “The day is done, we are but for the night.”

The day is done, we are but for the night – meaning it is time to rest, to reflect, to slumber, to slow down, to live, to refresh. Shakespeare actually meant it to mean that they were doomed in their fight: the enemy had won and the darkness of night had triumphed. So make of that what you will, and yes, I am totally taking it out of context and one should always be wary of doing that, but I love being for the night. Taps commemorates the gift that the passing day was to me. Taps heralds in the night – a night of rest and restoration, always to be championed again the following morning with the new day.

I’m usually exhausted and so ready to fall into my bed, but I am grateful for Taps each night. A reminder of God’s faithfulness at the close of each day – I didn’t think the sound of a somber melody could do that, but it’s often in those sweet, familiar moments each day that God’s provision is so clearly seen. “Jesus I am resting, resting, in the joy of what Thou art. I am finding out the greatness of Thy loving heart.”

Btw, the title of this post is from a Pablo Neruda poem of the same name. Definitely worth reading.
Posted by Carey Beth at 10:29 AM