I may have been one of the crazies in the movie theater at midnight last night. At least I wasn't one of the crazies who got there 2 hours early to secure a seat. Although, I must say, had we not divide and conquered at the Georgetown Theater, we probably would have been stuck sitting front row, necks cranked up, sitting entirely too close to Jacob Black's really hot, I mean tan, body.


First of all, Abianne, Shannon (my fellow Twilight die-hards,) and I were pretty surprised at who showed up for movie. It wasn't your average tween crowd in the least. Instead, the theaters (all 8 that were open to show the film last night) were jammed with girls, and an occasional guy, all about my age(going on 24) and older, who seemed rational and functioning enough to at least question why they were sacrificing sleep and the delights of having a well-rested Friday in order to see Edward Cullen's all too red lips light up the screen. I shouldn't have really been surprised by the make-up of the audience -- just yesterday, I read an article in the Washington Post describing the Twilight phenomenon particularly among women, not only teens, who have become completely engrossed with the series. One woman bought three dogs and named them after the Quileute wolf pack after the books apparently changed her life by unlocking a sea of sub-surface emotions. Hmmmm okay.

Secondly, and I always thought it would be a fun job to choose the previews that are shown before the main event, the previews were perfectly tailored to this audience of early 30 year-old lovesick women. There was first a preview for Daybreakers, some crazy, futuristic flick about vampires who rule the world and are running low on human blood. Hmmmm okay -- quite appealing to the few who are actually seeing New Moon because the blood-sucking side of Edward appeals to them more so than the "I'm in love with Bella and want her so badly but am torn to pieces because I also want to kill her" side of him. Next, there was an uber romantic film about a Romeo and Juliet love story set in Italy amidst two generations of destined lovers. Oooo la la. Then, there was Me and Orson Welles. Who cares that the majority of the audience has no clue who Orson Welles is. Zac Efron's in it; enough said. And finally, Robert Pattinson's new movie, Remember Me. Wow -- you should have heard the murmurs and shrieks when his face lit up the screen. Time to see if RPatz can actually act. From the likes of the preview, he can. 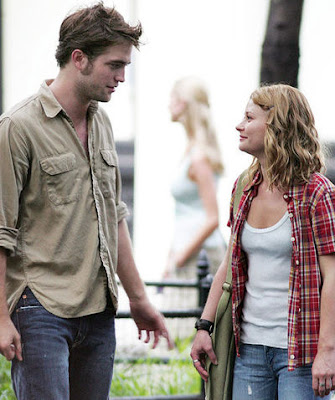 And then the lights dimmed. This was why we were not all in bed at 12:05am on a Thursday night. New Moon begins.


In general, I thought the movie was way more hilarious than the producers intended. The music, albeit pretty cool, also created a pretty trippy feel throughout the film. Although yes, I was sipping a bit of red wine, the music was putting me to sleep more so than awakening my senses to Bella's pain of loss and then thrill of reckless adventure, Jacob's sweet yearning for her, and Edward's -- ummm Edward's ummmm -- Ok, truthfully Edward brought very little to the movie. Yea, yea I know, he was hardly in it, but even Edward and Bella's kissing looked forced and awkward. I shouldn't be too harsh. Edward is supposed to be a torn and broken character. Robert Pattinson plays that side of his character well, but there needed to be more passion. For crying out loud, Edward was trying to kill himself over the loss of Bella right before she saves his life. The gravity of their reunion wasn't captured at all. And the whole Volturi sequence was way more frightening in the book.

Here's the dynamic duo themselves: 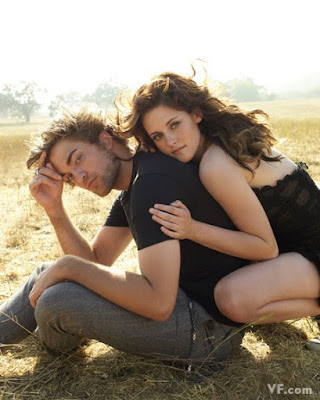 Kristen Stewart's Bella was so mechanical and seriously annoying at times. I'm not hating on Kristen; she plays Bella really well, but the character Bella herself is just a mess. She can hardly string three words together without stalling or mumbling. The only time she really got it right was when she was mad; such as the rain scene with Jake when she yells at him for not being the friend he once was to her.


Taylor Lautner plays a mighty fine Jacob Black. I for one am definitely on his team. I don't think he can actually act at all, but no one's holding that against him. Excuse me, but what happened to the big kiss with Bella?? Major letdown.


Big highlight -- when we see Alice's vision of a vampire Bella frolicking in the forest with Edward --- HILARIOUS! Such a cheese-fest, but you know you love it. My whole theater was clearly already salivating for Breaking Dawn to hit the big screen.


Another highly entertaining part -- when Bellas crashes on her motorcycle and Jake takes off his shirt without a moments notice to wipe the blood away. Baaaaaahaha. You know you love it, times deux.


Seeing Edward recite lines from Romeo and Juliet wasn't half bad either -- are Edward and Bella the R & J of today? Star-crossed lovers with an ill fated destiny??? Ahhhhhhhhhh. No, because we all know the story, and can't wait for the next movie.