My brother and I once made an epic roadtrip from northern California to Dallas in order to get his car back home from college. Chris is so talented at a wide array of things, but bless his heart, his car is something he is not good at....unless you consider the hundreds of empty gatorade bottles that have piled up in the back of his tahoe since his sophomore year of high school. The general upkeep of both the interior and exterior of that green machine was pretty much shot and gone the moment Chris first gunned the engine. This included his air conditioning. Driving through Death Valley in July with no air conditioning? It was hot, let me tell you what. Also, for some unknown reason, we chose not to stop at the last gas station before the Valley, so I literally thought we were going to die in the desert. No gas, no AC, and some really weird lights coming at us on the horizon (long story, but we were convinced that aliens were coming for us. So convinced in fact, that we turned the car around and fled.) 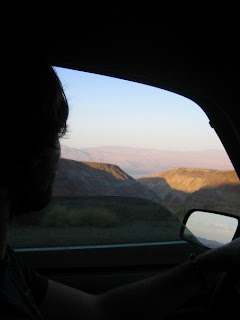 The one thing we did have on that trip was music. I remember listening to Sigur Ros while driving through the streets of San Fransisco, windows up, with the world going by all around us. People, trolleys, cars, strollers, lights, life. But no sound. The city was silent, but the ethereal sound of the music made it more real than I had ever experienced it. When one sense is taken away, your other senses are so enhanced -- so with no noise from the city, I really felt the city with my eyes. 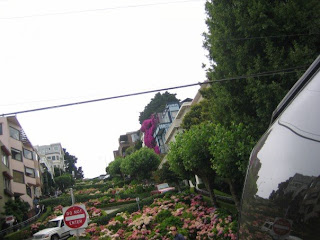 As we continued our drive, the music definitely changed as we got tired of listening to the...ummmmm....maybe 6 CD's that Chris so expertly planned to have in his car on a 3-day roadtrip. So desperate were we for some new tunes that we put in El Ten Eleven and made up our own words to the wordless tunes. "DIET COKE--oh ya.....bubble gum! Diet Coke...oh ya." We also started thinking of cool band names. Hence, why I like that little game from yesterday's post so much. We started noticing the little snippets of things we would say in our ordinary conversation, and we realized how poetic it really sounded. I can't remember many examples, but I commented about the snow on top of the mountains when we were leaving Lake Tahoe, and said that it looked like snow-covered sand traps. Ooooooo good band name, eh?
Ever since then (this was 3 1/2 years ago,) I've tried to make a point to find the poetry in what we all say to each other on a regular basis. We talk. You talk. I talk. I live with 8 girls. They ALL talk. It's hilarious too. No matter what, there is always beauty in what we have to say to each other. I wish I had a voice recorder about 83% of the time when my friend Abigail says anything. She is a nut. And I love her. Taking her words in splices and bits and phrases, I'd have about 50 awesome band names right away. Or my friend Liz, her dad grew up in Mexico and practically breathes beauty into everything he says. Or my friend Cooper, he always puts funny things up on his gchat status. Today it is, "A coworker walked behind me and it got really cold. Is she a witch?!" Haaaa. Ok so maybe not beautiful. But great nonetheless. Words. Listen up.
Now I'm off to meet Beyonce.
Posted by Carey Beth at 4:13 PM