Beauty and the Beer

While driving home from work yesterday, I saw a Blue Moon Brewing Co. delivery truck. I tried taking a picture of it but was too busy jammin to Jason Derulo's* "Whatcha Say" while not wanting to rear end the car in front of me at the same time. ("'Cause when the roof caved in and the truth came out, I just didn't know what to do" -- lyrics just don't get any better than that, right Abigail?) I completely missed the Blue Moon truck, but did get this picture. 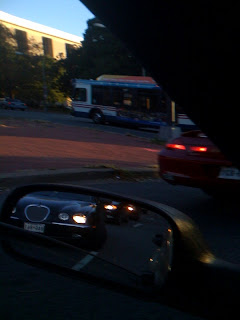 Note the jag in the rearview. So posh.

What struck me about the truck was the print on the side of it. Far from the typical "tap the Rockies" jagged mountain scene of any other beer truck, it was a painting of Blue Moon beer in a glass, with the bottle next to it, and a couple of oranges and orange slices in a bowl beside it. It looked straight out of Van Gogh's "Cafe Terrace at Night" if you could zoom in and actually see what food and drinks are on the cafe tables.

I found it so cool that such beautiful art can be found on the side of a beer delivery truck. I went to the Blue Moon Website, and it turns out that the company featured an art contest in 2008 in different cities. No real point to it except that it's an awesome marketing tool to have artists depict how the beer inspired their work. The paintings are incredible and creative. One of my favorites is from the Philadelphia collection and is advertising the company's "Honey Moon" label. It looks like a French vintage poster from the Belle Epogue: a girl jumping over a moon that has little beehive holes in lieu of moon craters.

How amazing it is that real beauty is all around us. I once heard someone speak of God as the "Great Artist." He really is. We as human beings have the privilege of being created in God's image. Because of this, his creativity, wonder and beauty that he put into creation is reflected in us and in what we do. Even in paintings on the side of beer delivery trucks. His beauty is all around us. That is no small wonder.

Disclaimer: I'm not much of a beer drinker, but the first time I had a Blue Moon, orange slice of course included, was in Nashville, TN, at Mafioso's with my friend Ellen. I had just gotten back to the states from 7 months in Argentina, and it's a really happy memory.

*Jason Derulo took the chorus of his song from Imogen Heap's "Hide and Seek" which is a totally chilll song to listen to, was on the OC soundtrack during Caleb's funeral scene, and reminds me of skiing in Telluride during my 2nd year at UVa. My friend Nora introduced me to Imogen Heap's CD. Thank you, Nora.
Posted by Carey Beth at 10:36 AM